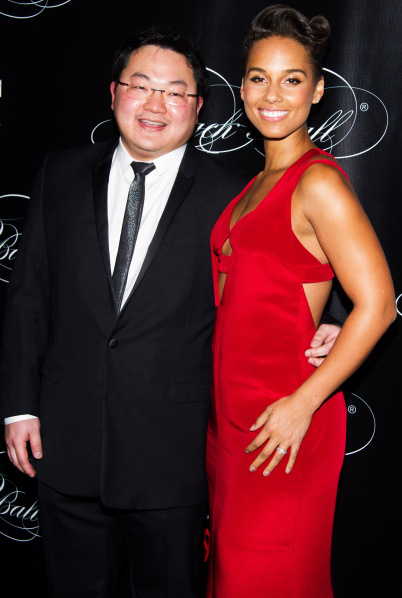 He arrived from out of nowhere in 2009, a mysterious, geeky 28-year-old dropping ridiculous amounts of money all over the city.
When Lindsay Lohan was celebrating her 23rd birthday at 1Oak, he sent 23 bottles of Cristal to her table. He spent $160,000 on bottle service one evening at Chelsea hot spot Avenue and once flew eight waitresses from Greenwich Village club Pink Elephant to an after-party — in Malaysia.
Yet no one knew who this man, Low Taek Jho — otherwise known as Jho Low — was, or where he got his money.
The intrigue only deepened over the next few years, as Low collected a staggering amount of luxury real estate and famous artwork. He spent $30.55 million for an apartment in the Time Warner Center, as well as $23.98 million for a condo at the Park Laurel.
He bought Monets, Basquiats, Rothkos. He is widely thought to be the person who bought Picasso’s “Women of Algiers” last May for $141 million at auction — the most expensive painting ever purchased. He made the ARTnews list of the world’s 200 top private collectors.
Now the mystery of Jho Low may have finally been solved, thanks to a scandal that threatens the government of Malaysia and Wall Street titan Goldman Sachs.
Real-estate brokers in New York are being asked questions about the deals they worked on involving Jho Low, The Post has learned.
Federal investigators are probing what could end up being “one of the largest money-laundering frauds in the world,” a source told The Post.

Jho Low certainly is well connected. The son of a rich Malaysian businessman, he attended the Wharton School and became a financial consultant. One of his clients was Terengganu, an oil-rich sultanate of Malaysia, which in 2008 set up a sovereign wealth fund called TIA.
One of Low’s friends from boarding school in London was Riza Aziz. In April 2009, Aziz’s stepfather, Najib Razak, became prime minister of Malaysia.
According to an online investigative outlet, the Sarawak Report, it was Low who helped orchestrate Razak’s takeover of TIA. The fund was transformed into 1Malaysia Development Berhad, otherwise known as 1MDB. Razak was made head of its advisory board.
The stated purpose of 1MDB was to raise money through bond sales — cash it would use for infrastructure projects in Malaysia or to launch joint ventures with Middle Eastern entities. It would earn enough to benefit the country, while giving the bond holders a reasonable rate of return.
As advisers to 1MDB and Razak, Goldman Sachs benefited greatly. There were three bond sales for 1MDB in 2012-13 totaling about $6.5 billion, reportedly yielding fees, commissions and expenses for Goldman of almost $593 million, about 9.1 percent. The typical cut for an investment bank is about 5 percent.

Then, last year, it all started to fall apart. First, the fund missed a payment on the $11 billion it owed to creditors. Then, in July, The Wall Street Journal reported that about $681 million from 1MDB ended up in the prime minister’s private bank account. Razak denied the money came from 1MDB.
There were calls for Razak’s resignation, which he has ignored, as Malaysian officials and the US Justice Department — along with Switzerland, Singapore and Hong Kong — have launched investigations into possible corruption.
Goldman Sachs, meanwhile, finds itself the target of fury in Malaysia. Its chairman for Southeast Asia operations, Tim Leissner, was involved in 1MDB, and his wife, fashion designer Kimora Lee Simmons, used social media to publicize her friendship with Razak’s wife, Rosmah Mansor. Mansor has spent millions of dollars on jewels, clothes and handbags — drawing unflattering comparisons to “Steel Butterfly” Imelda Marcos, the shoe-hoarding former first lady of the Philippines.
Leissner and Simmons abruptly returned to the United States, and Leissner resigned from Goldman last week.
Everything about the 1MDB scandal has been shrouded in intrigue. The transfer to Razak’s account involved Malaysia’s Ambank. In 2013, shortly after the money was transferred, Ambank’s founder, Hussain Ahmad Najadi, was shot dead in a Kuala Lumpur parking garage.
Najadi’s son, Pascal — a former banker for Merrill Lynch in New York — has fled Malaysia for Russia with his widowed mother. In an interview with The Post, Pascal said his father was murdered to prevent him from revealing what he knew about 1MDB. The Malaysian government has denied there is any connection.

Now the feds are investigating if Jho Low’s wild spending was courtesy of 1MDB, and if he was hiding assets or laundering funds.
Pascal Najadi has no doubt. “Jho Low was the architect . . . of the machinations of the Najib government,” he said.
If the idea was to keep a low profile, Low wasn’t following the script. He rented a $100,000-a-month Midtown apartment for himself — an unheard of sum during the height of the recession — and spent another $50,000 a month to house his entourage in the same building where Sean “Diddy” Combs was living.
Soon Low’s entourage of black Escalades eclipsed Diddy’s, purple Bergdorf Goodman bags were delivered to the Park Imperial, and Low was buying condos on the Upper East Side and 1 Central Park West. Jho Low even bought a jet belonging to New York real-estate billionaire Joseph Cayre.

Low helped Aziz and his partner Joey McFarland found the Hollywood production company Red Granite Pictures, which produced “The Wolf of Wall Street” with Leonardo DiCaprio. Low is thanked in the credits.
The Justice Department’s Kleptocracy Asset Recovery program now is investigating the Low-linked real-estate purchases.
In New York, brokers are “scared,” said another source with direct knowledge of the deals. “They don’t have fancy high-priced lawyers to protect themselves.”
Low, meanwhile, is selling — fast. He unloaded three art works — a Monet, Picasso and Basquiat — at a loss for a combined total of $54 million at Sotheby’s in London.
Aziz and McFarland declined interview requests. McFarland has tweeted photos of himself beside artworks owned by Low — including the “picture of the century,” Picasso’s “Women of Algiers.” “Me and the picture that broke the record,” he tweeted.
If Red Granite’s funds can be traced to illegal use of Malaysian state funds, it, too, could be seized by the Justice Department.
A spokesman for the production company told The Post via an e-mailed statement, “There has never been anything inappropriate about any of Red Granite Pictures or Riza Aziz’s business activities.”
As for Jho Low, he’s no longer throwing money around clubs. His bank accounts in various countries have been frozen, and he is short for cash, according to the Sarawak Report.
Najadi says, if Low’s smart, he’ll tell authorities what he knows.
“He is running out of options,” Najadi said. “The best case scenario is for Jho Low to cooperate with law enforcement — if he can.”
sumber
Rakyat Malaysia kena berterima kasih kepada Jho Low kerana contoh baik budak cina kolop ni la rakyat Malaysia dapat BR1M..!
Pemimpin negara pun nampaknya cukup berbangga dapat berkawan dengan budak cina kolop ni..!
Tak gitu?
Lu Fikir La Sendiri!!!
Posted by PUTRA MERDEKA at 4:15 PTG