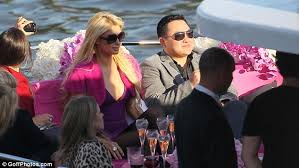 The lavish superyacht 'Equanimity' linked to Malaysian businessman Jho Low has sailed into Hong Kong waters, according to the South China Morning Post (SCMP).
The newspaper said while there has been speculation that the yacht, which is among the largest in the world, is to be sold, the purpose of its stay in Hong Kong is not clear.
"And no one connected to it is willing to talk," it added.
SCMP contacted Northrop & Johnson, a Hong Kong-based broker for superyachts, but the firm declined to comment.
One of its sales brokers told the publication that the company had a confidentiality agreement with the client.
"The client does not want any publicity," said the broker.
According to SCMP, the yachting press often cited Jho Low as the owner of the vessel, but his lawyers have denied this.
"Even so, the yacht appears to be at his disposal and he has hosted a number of lavish parties on board with Hollywood stars, such as Leonardo DiCaprio.
"The last of these was reportedly a birthday bash off the coast of South Korea in November 2015," the newspaper reported.
The report stated that 'Equanimity' has a crew of 28 and can accommodate 26 guests in a master suite, three VIP rooms, three doubles and two twin staterooms.
It features a spa/beach club with a sauna, steam room, "experiential shows", a plunge pool, beauty salon and gym.
It also has a 20-metre swimming pool, and is one of the few superyachts with a helipad.
SCMP said it is understood that the yacht underwent maintenance or repair work, and spent much of its time in Hong Kong at the Yiu Lian dockyard on Tsing Yi.
"But a manager at the dockyard said he was unable to discuss 'Equanimity', since his company had also been required to sign a confidentiality agreement," it added.
According to a report in SuperYacht Fan, US$175 million 'Equanimity' was built by the Netherlands-based Oceanco and was delivered to her owner in June 2014.
The yacht has a length of 91.5 metres and is built of steel, with an aluminum superstructure, while the interior has some oriental-inspired themes, using materials as wenge, bamboo and gold lead.
A check by Malaysiakini with Marine Traffic today placed the current location of 'Equanimity' in the South China area about 200 kilometres east of Hong Kong, having departed the island yesterday.
The United States Department of Justice (DOJ) has named Jho Low and Riza Aziz, the stepson of Prime Minister Najib Abdul Razak, in its court filings related to the alleged abuse of 1MDB funds.
Jho Low is said to be close to the prime minister’s family.
sumber