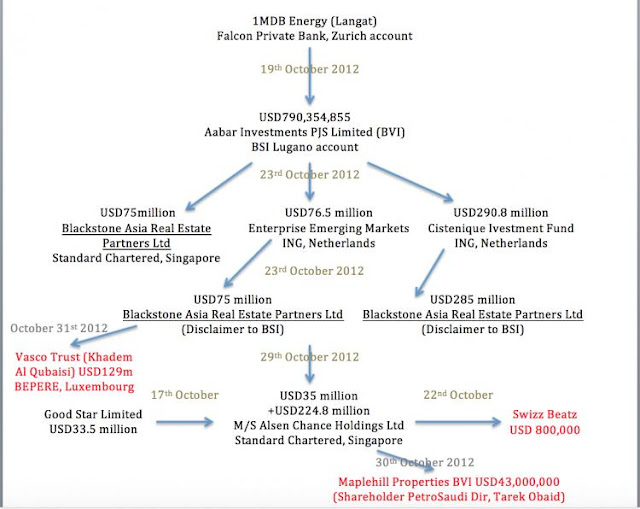 Bank details released by the Singapore Court in the case of BSI banker Yak Yew Chee give a telling insight into how the plunderers from 1MDB were laundering and spending their stolen money.

Yak has pleaded guilty to a number of money-laundering charges carried out for 1MDB’s Jho Low, which included lying to other banks on his behalf.

Prosecutors said one of the key accounts used for distributing money siphoned out of the fund in 2012 was a company named Alsen Chance Holdings, held at Standard Chartered Bank in Singapore and managed for Low by his agent Eric Tan.

Sarawak Report has identified that one of the payments made from that account was $43 million dollars sent on 30th October 2012 to the off-shore company Maplehill Properties BVI, which is owned by the PetroSaudi Director Tarek Obaid.

According to the Singapore investigations, this $43 million payment came straight from a massive theft from 1MDB’s Energy Langat the day after a total of $260 million arrived in the Alsen Chance account.

PetroSaudi was the company involved in a separate, earlier controversial venture with 1MDB in 2009, from which billions also went missing.

Obaid joins entertainer Swizz Beatz, already revealed to have received $800,000 from the same account. That money is believed to be linked to a performance Beatz was due to give at Jho’s Birthday bash in Vegas the following month, said to be the most lavish event ever seen in the gambling town.

How the money travelled

The paper trail produced by the Singapore prosecutors shows that no less than $790 million had been immediately siphoned out of 1MDB subsidiary company Energy (Langat) after it raised a $1,75 billion bond in October 2012, through Goldman Sachs, ostensibly to invest in power plants.

Khadem Al Qubaisi passed the stolen $790 million through a bogus Aabar account and then creamed off $129 million via a later backhander from Jho Low’s Blackstone Asia Real Estate Partners Limited
That payment was later accounted for on the spurious notion that it was a “refundable deposit” to the Abu Dhabi sovereign wealth fund Aabar, paid as security for its co-guarantee on the loan.

In fact, the entire amount was channelled 19th October into a bogus Aabar subsidiary company in the British Virgin Islands, called Aabar Investments PJS Limited, which had been set up by two Directors of Aabar, who were co-conspirators in the heist.

Meanwhile, $260 million had been flipped on 29th October to Alsen Chance (which like Blackstone was set up by Eric Tan at the same Standard Chartered Bank branch in Singapore). The following day Alsen Chance sent Tarek Obaid’s Maplehill Properties the $43 million.

Bank statement for Alsen was included in Singapore Court papers
It can be seen that Eric Tan (Tan Kim Loong) was also paid a cool million dollars out of 1MDB’s stolen money for his pains in running these accounts.  $5 million went to a company called Strategic Markets amongst a number of other recipients.

Sarawak Report has already established that Maplehill Properties is entirely owned by Tarek Obaid and it was through this off-shore company that he held his share in the Hong Kong company Plato One, which is in turn the major shareholder of Bellevue Education, which controls several private schools in the UK and also in Switzerland
So, why was this director of PetroSaudi receiving secretive payments into his off-shore account, from money filched from the 1MDB Energy (Langat) deal and how much of it is now sitting in top private schools in the UK and Switzerland?

The money came from ‘Aabar Phase’ not ‘Good Star Phase’!

The US Dept of Justice/FBI investigation into money stolen from 1MDB identified PetroSaudi as being involved in facilitating the first major theft from the Malaysian development fund, which it dubbed ‘The Good Star Phase’ in its 136 report in July.

However, by November 2012 the arrangement with PetroSaudi had been allegedly terminated, 1MDB having claimed it sold its share in the joint venture arrangement for $2.3 billion.

The bond issue for 1MDB Energy (Langat) was then raised as part of what the DOJ/FBI described as the second “Aabar/BVI Phase” of the scam, conducted in collusion with Aabar Chairman Khadem Al Qubaisi and his CEO Mohamed Al Husseiny (both now in jail in Abu Dhabi).

Given that the PetroSaudi Directors are continuing to argue, via teams of expensive lawyers in Switzerland and the US, that they themselves were merely innocent victims also of the shennanigans in 1MDB (having originally denied there was any wrong doing) we ask why was Obaid accepting this concealed payment?

Surely, if there had been a genuine debt related to his earlier business with 1MDB, it should have been paid up front to one of the companies in the PetroSaudi group not through Jho Low, who claimed to have no connection with 1MDB anyway?

Earlier payment to Tarek was through Good Star

Jho Low has continued to deny that he is the owner of the company Good Star Limited, which siphoned out over a billion dollars from the original  joint venture with PetroSaudi and paid Tarek $85 million straight after.

Likewise, PetroSaudi still publicly maintain that it is indeed they who own Good Star, even though the Singapore and US authorities have now confirmed through documentation that the owner was Jho Low.

Jho opened the Good Star Account at Coutts – Documents in Singapore court case
So, isn’t it time Tarek and PetroSaudi finally came straight and told Malaysians what has been going on…. or time somebody arrested the lot of them?

The Singapore statements also show that Good Star Limited paid $33 million into the Alsen Chance account on 17th October, replenishing the account which had just dropped beneath one million dollars.

Immediately after several multi-million dollar payments were made (including to Cinema Archives, a company likely to have been used by Red Granite in the making of Wolf of Wall Street at that time).

It a matter of record that the 1MDB PetroSaudi engagement had finally been wrapped up the previous month in September 2012, with the alleged ‘buy out’ of 1MDB’s PetroSaudi shares by an obscure company named Bridge Global.  Bridge Global then ‘invested’ 1MDB’s purported proceeds in an opaque Cayman Islands fund.

So, was this $43 million some kind of termination payment to Tarek and if so on what basis was it agreed and what did it have to do with Jho Low?

If PetroSaudi still maintain they own Good Star Limited, which they were continuing to claim just weeks ago, what is the connection to Alsen Chance and Jho Low?

Victim or Voleur? Time to explain!

Tarek Obaid and his partner Patrick Mahony have threatened to sue numerous press organisations, employing lawyers at great expense over very many months, in order to deter coverage of their ‘innocent dealings’ with 1MDB.  Yet we can confirm they have still failed to contact Sarawak Report, which has been publishing numerous articles, which have received millions of hits.

Instead, they have commissioned PR people, such as the Swiss Marc Comina to orchestrate   black PR and shadowy online defamation campaigns against this blog. We suggest this is because they fear a confrontation in court about the facts.

However, now the whole matter has been settled in open court in Singapore, Tarek Obaid can no longer shy away from an explanation to the Malaysian public as to why he received this payment…. after all it was their stolen money and he is now proven to have repeatedly lied on the 1MDB’s behalf.

If Tarek Obaid is a ‘victim’ he owes a public explanation to Malaysians. 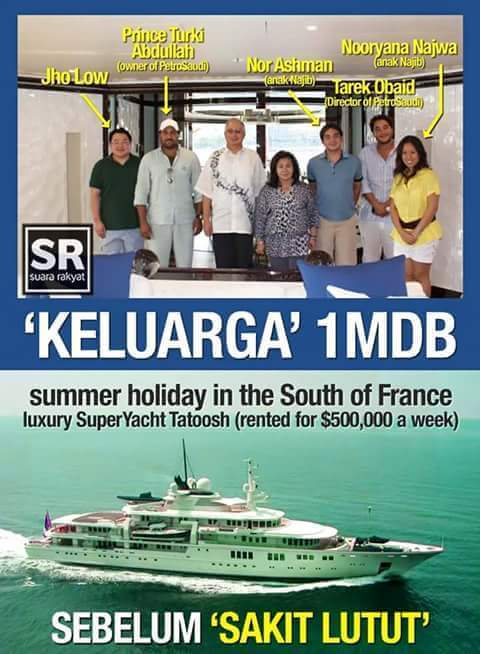