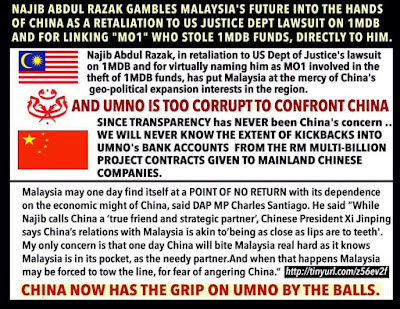 It is all about wriggling to get off a hook of his own making, of course.
However, the Prime Minister who has so blatantly stirred up sectarian suspicion against his own ethnic Chinese minority in Malaysia is now in the process of handing the economy over to their ‘homeland’ on a plate.

For months it has been known in inner circles that Malaysia’s de facto Second Finance Minister has been spending time in Beijing, path-setting deals to bail out Najib over his 1MDB disaster. It is one place he dares to travel.

We refer not to the recently retired Ahmad Husni, currently being hounded for raising 1MDB as a matter of concern during the Budget Debate (the Speaker bizarrely accused him of violating ‘official secrets’).

Nor to his successor Johari Abdul Ghani, who yesterday begged reporters to stop asking questions about the linked SRC International:

“Don’t talk anymore about SRC, there is no solution.”, he told them .

Low was cited as the prime orchestrator and a key beneficiary of the thefts from Malaysia’s development fund by America’s Department of Justice. He is known to be at the heart of the on-going international investigations into criminal wrong-doing at BSI Bank and Falcon, both now shut down in Singapore.

As the first criminal prosecution got underway today into 1MDB in Singapore (the case against former BSI wealth manager Yeo Jiawei) Low’s name was within no time brought up in the court as the man behind the accounts in question, whom Yeo went on to directly work for after leaving BSI in 2014.

Yet this outrageous and flamboyant junior shyster has remained the key confidant upon whom Najib depends, as he struggles to find a way out of the mess that Low’s own astonishing, world-record beating level of theft got Malaysia into in the first place.

At the end of 2014, as 1MDB found itself unable to service the vast debts caused by borrowed billions, which were then stolen, Low’s game-plan had rested on a public offering under effective false pretences.  That IPO foundered as 1MDB lost any shred of credibility in the face of well-founded criticisms and then revelations over the PetroSaudi deal.

The next ‘bail out’ came last June with an injection of support from Abu Dhabi, based on a bogus guarantee arranged with the Aabar fund. This may have provided short term relief at a time of political and economic crisis, but in the longer term it has resulted in a stinking law suit after the Abu Dhabi sovereign wealth fund sacked its most senior officers for colluding with Jho Low’s schemes.

To meet debt repayments over subsequent months Najib has pressured government linked companies and funds into blatant handouts, the most notorious being the raid on the pilgrimage fund, Tabung Haji.

However, further monster payments are now pending, including an upcoming RM660 million due for the missing RM4 billion borrowed in 2011 from SRC.

Yesterday, Johari Abdul Ghani told reporters that SRC is still trying to retrieve the bulk of its funds, allegedly banked with the defunct BSI, although just days before the Swiss Attorney General shocked the world by confirming that virtually all the money ($800 million) has actually been stolen… ie it is not stuck in some frozen SRC bank account, it’s gone.

Chinese basher at home – on his knees to Chinese abroad

So, having accused the ethnic Chinese Malaysians of having lost him the popular vote in the last election and gone on to accuse them again of being responsible for the pro-democracy/anti-corruption Bersih marches, which he ruled illegal, Najib has now used his own ethnic Chinese fixer, Jho Low, to go with cap in hand to mainland China to bail him out.

Sarawak Report exposed in July exactly how Low and Najib had constructed the East Coast Rail deal with the Chinese Company CCCC to “lose” 1MDB’s debts. They simply agreed to pay double the actual price of the contract in order to siphon the money out.

In parliament last week Najib confirmed the contract, with the smallest of cosmetic adjustments, concluded with a company that has already been banned by the World Bank over its fraudulent tendering record (in case anyone was wondering, Najib did not submit the East Coast Railway to an open tender).

This was the flagship project which Najib shook hands on in China yesterday, forming the central plank of his showcase visit. And, of course, under-pinning the project was a RM55 billion ‘soft loan’ agreement from – guess who – China!

Particularly welcome to Najib was the ‘generous’ provision allowing for zero repayments for the first seven years, letting Najib himself entirely off the hook, with chickens coming home to roost only after he plans to have moved on… 1MDB’s debts covered up in the meantime.

But, of course, those chickens will come home to roost and big time too. No Malaysian can for one moment seriously imagine that its looming super-power neighbour, hungry for control over its waterways, hungry for its resources in land and minerals, hungry for space, is lending super-cheap money out of the kindness of its heart.

Tied up in Najib’s 1MDB bail out is a huge geopolitical swing away from Malaysia’s traditional allies, who disapproved of his world-record kleptocratic theft, towards China’s expanding militaristic might.

That was China’s price and Najib has paid it this week with a range of ten major deals, agreed assistance of his freelance informal negotiator behind the scenes, the fugitive criminal Jho Low.

Not only has Najib agreed to buy frigates for the first time off China, but the mammoth rail project is all based on China’s own conditions . It will be designed, organised and built by the Chinese according to their terms and in violation of all the principles of UMNO’s much-vaunted pro-Malay NEP.

So, whilst on the one hand Najib has been funding local thugs to dress up in red and hunt and threaten patriotic, pro-democracy Malaysian Chinese, on the other hand he is selling out the country and all his own party’s pro-Malay principles to the anti-democratic China itself.

Merely to save his own political skin, he has offered this super-powerful neighbour a stranglehold of loan power over his government and has allowed it moreover to forge its own ‘silk road’ transport system across the country and beyond – a project that will be totally and utterly controlled by China.

He has even in a stroke moved to plug into China’s military infrastructure – offering the possibility of joint manoeuvres off-shore in coming years or months?

Najib plainly sees his master-stroke as a ‘punishment’ to the west for failing to tolerate his grand corruption against his own people. Jho Low, on the other hand, with the persistent audacity and arrogance of youth, evidently believes he has pulled off yet another grand heist on behalf of his generous boss and, in true style, has in the process moved on and up to a bigger patron altogether.

The Chinese Tsunami against Malaysia has not come in the form described by Najib, which was merely an election loss for UMNO, it has been unleashed as a sky-high breaking wave across the country by his own fixer to save his personal position.

Najib (and possibly his nation) will be swept away by the tide of this disgrace.

Jho Low on the other hand has plainly seen his opportunity to restore his fortunes, reinvent himself as a Chinese billionaire, retain his yacht, fight for his frozen US assets and win tokens of gratitude from his re-adopted ‘mother country’! 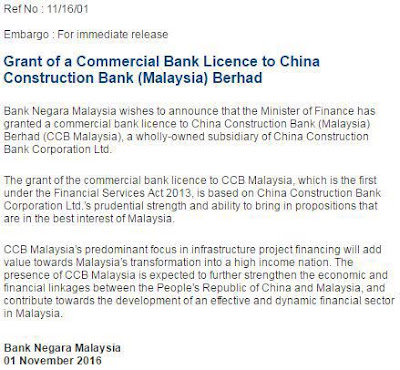