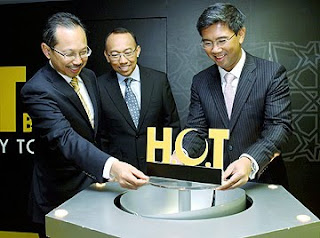 Malaysiakini quoted him saying further, “There have been many GLCs that have ex-politicians appointed as chairpersons, but Felda is a rare case, where the market is concerned with such an appointment. It sends the wrong signals.”

On the contrary, Zafrul.

The wrong signal to the market that is sending jitters to investors is emanating from Maybank. By the end of this posting, even Zafrul should be convinced that it is he himself that is unsettling the market. 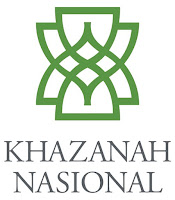 If I am still active in the market, I will be MORE concerned with the general level of incompetence, lack of integrity, and unnationalistic spirit, including the absence of compassion for fellow Bumiputera, prevailing amongst the existing crop of so-called professionally trained young CEOs and senior executives of GLCs.

It will not just end there. It goes all the way up to the CEO of Khazanah, Tan Sri Azman Mokhtar and his senios executives. Compunding further will be the problems of moral hazard and dishonesty of the Minister-in charge, Tan Sri Nor Mohamad Yakcop.

For someone who started his career in 1996, Zafrul rise straight to the top of the corporate food chain without any operating experience would unsettle any financial markets.

Zafrul began his career circa 1996 and his first job was believed to be as an Investment Analyst in a small French Bank, Credit Agricole and became their representative Director.

He was then roped in as Investment Relation Officer at Tenaga Malaysia Berhad by the then Chairman Dato Seri Dr Jamaluddin bin Jarjis or JJ as everyone would call him.

All it takes is to understand that his mother, Raja Zaharaton Raja Zainal Abidin was the Director General of Economic Planning Unit and represented Government as Independent Director of TNB at the time of JJ and the time of Dato Dr Awang Adek Hussein as Chairmen of TNB in the mid 2000s. 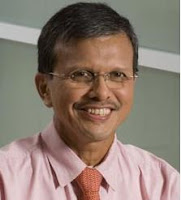 They say Zafrul has family relation via JJ's wife, Datin Seri Dr Kalsom Ismail and it was when JJ was MoF II to Tun Dr Mahathir that he was appointed COO and later promoted to become CEO of Avenue.

One can read his bragging of himself in this Nut Graph interview here and this company profile of RZA here to get an idea of his family.

Zafrul fits the myCEOwatch blog description here as "the country's most ambitious Malay crony of the first decade of the 21st century." He fits in the model Melayu Liberal spewing neo-liberalism but practisioner of cronyism and nepotism. Read here and here.

His irresponsible view of Isa Samad is reflective of his arrogance from the ignorance of youth and his ideological and personal alliance with the most hated son-in-law in Malaysian history, Khairy Jamaluddin. 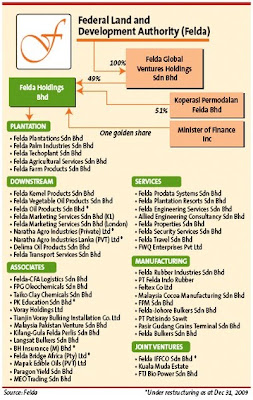 It was around the time of 2005 when Zafrul was at Avenue Asset, JJ was MoF II and mother Raja Zaharaton was Director General of EPU that there was an attempt to list the business operation of the Felda organisation, Felda Holdings Berhad.

This is something for MACC to dig back.

The idea is heard to have come from another member of Maybank's current top management.

The linkages of those names was one issue but another issue was the eventual shareholding structure of Felda Holdings.

Off course, it is will no more be Koperasi Felda and Felda proper holding the bigger chunk but reduced for a big piece of the pie to be divided up by rats and other animals.

Some say Khairy has his hand in that piece of the pie.

There was also a scheme for a Felda Holdings to buy an expensively priced business abroad as to justify raising fund through the market. This amaze the internal staff and management because they know Felda is cash rich and do not need to list and share the cake of their effort. 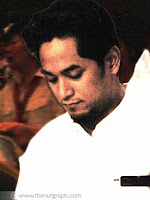 It is an open secret that Zafrul was KJ's proxy in NGO, Promuda and he was on KJ's side when Promuda was split apart by the Tun M-Tun Dol clash. One can say also he was non-commital and playing it safe.

It was around that time that Zafrul open the books of Avenue Capital when Khairy and Kalimullah barge into the office and say, "I want this Company."

Zafrul had an earlier ambition to do an MBO of Avenue from MoF. He submitted a proposal and Dato Hamzah Zainuddin also submitted one to Tun Dol.

Both papers landed on Zaki Zahid's desk but did not reach the destined Koperasi Usaha Bersatu (KUB) assigned by Tun Dol but to Khairy's secret penthouse for rendesvous with Maya Karin.

He left before the merger began as though in protest. The whole system, rules and procedure, process of Government and Parliament's PAC was manipulated and abused to enable ECM Libra to takeover Avenue Asset. 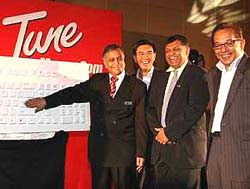 Zafrul joined Citibank and again left in a short time.

Within a year, he emerged as CEO of Tune Money with Tony Fernandez, Kalimullah and his ECM Libra team. Only an idiot will say they are not linked to Khairy. So it seems Zafrul was rewarded for betraying his former employer. 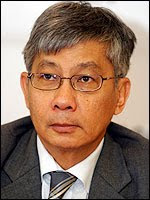 One corporate player said Dato Amirsham Abdul Aziz was linked to Khairy. He gave Khairy's associates of robber barrons the access to Maybank's funding and got himself rewarded as Minister who could only answer leaked question in Parliament.

As the days passed by and Amirsham betrayal of the Bumipoutera, I would believe if any source of stature would tell me that Amisham had "looted" Maybank in the BII deal.

Zafrul's presence in Maybank may not be Dato Wahid Omar's preference but at the request of somebody higher up. That is the problem with Wahid. He seems to be a loyal servant ever willing to carry out instruction from above and clean up other people's shit.

He may have had to obliged to absorb Zafrul to clean up or cover, in the name of restructuring, the bad loans of Khairy's associates.

Zafrul is a chap who is not worried about getting his hands dirty. What is meant as hands dirty is not hands on but play dirt. He belongs to the non civil service era of MCOBA product that not gentleman brave to face confrontation but infamous for using people and playing behind the scene. I have friends working under Zafrul.

Prior to Maybank, Zafrul got himself entangled in insider trading in the EON Capital-Hong Leong merger during his short stinct as Kenanga Director.

His former boss at Avenue, Deputy Chairman Gooi Hooi Soon denied sharing infomation with Zafrul and Zafrul denied as he took the stand in court. I don't buy their denial. It is easy to deny because it is difficult to proof.

Zafrul's so-called moralistic comment against Isa is really frightening because it is made part without any sense of guilt or shame from any attempt of self reflection. Is this crooked boy wonder claiming other's as crooked?

His comment about Isa Samad should be of concern to PNB as ultimate shareholder and other shareholders of Maybank. It is indicative of immaturity and negligent attitude common in other GLCs and Khazanah but is creeping into Maybank's top management.

How do you deal with an infantile CEO who can't understand that the very person who approve his appointment as CEO is the one that approve Isa Samad as Chairman? Is he questioning the decision of his ultimate boss, the Prime Minister? 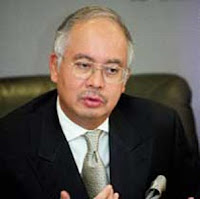 From the words heard, Najib is really upset and had instructed through Zafrul's uncle, Raja Nong Chik that a written apology be sent to Isa.

Zafrul is desperately seeking for an appointment from Isa to seek apology. He thinks we could do a Nazir Razak when he passed bad comments on NEP at the MCA Economic Conference last year and was given audience to seek apology and explanation i.e. lecture from Tun Dr Mahathir

He forgot that Isa knows of Zafrul's association with Khairy Jamaluddin, Tun Dol's son-in-law. (If he doesn't, this blogger will e-mail the Felda boss.) Isa is heard to have said, "He got better things to do (than meet that boy)."

People tend to kid Isa as pendek but the whole Maybank management will be shorter than Isa when they come begging on their knees to ask Isa not to reciprocate.

Felda has every right to be angry and reciprocate when a Banker shows no respect for client. More so, when those remarks are laden with political agenda.

Isa was fixed by Tun Dol, Khairy and a coterie of evildoers that include Abdullah's own family, certain Sahabat, Dato Azalina Mohd Said and Dato Norza Zakaria. For recollection, read back the series written in this blog to defend Isa - sini, sini, sini dan sini serta sini.

Now if I am Isa and the Chairman of Felda, I would immediately instruct Felda to take out all cash and deposits from Maybank. They can close their Jalan Maktab branch for all I care.

Another Bank can immediately takeover that same premise and with the deposit, they can instantly be a financial powerhouse.

Felda's money is not safe under the safekeeping of a Bank managed by a "good boy", as one SMS reply from someone that can be considered as Zafrul's boss described him.

Maybank Investment Bank must not qualify to be adviser or underwriter in the listing exercise of any outfit of Felda.

In the first place, boys should not pretend to be adults, be showered with accolades like Datokship, and socialise with adults until they are mature enough to know who is their boss, when to talk, and what to talk.

If the boy wish to speak as he pleases, quit his job and be a blogger.

Zafrul must truly be wet behind his ears to not know that Felda had been a major shareholder of Maybank from it's post Khoo Kay Peng era under the Government and a longstanding major client of Maybank. 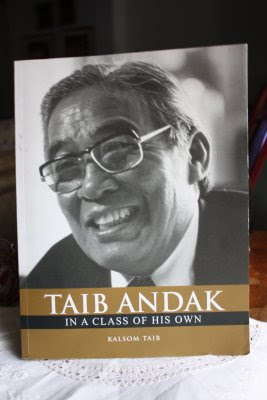 That is just the surface of the insult he has incurred on the Felda organisation. 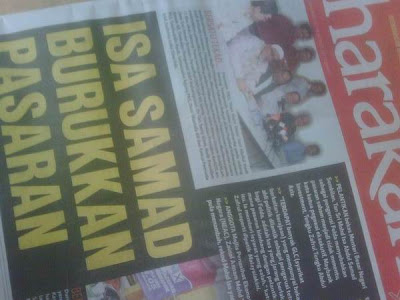 The damage the nincom-poop did
Zafrul has made himself a political liability and disservice to his political master. His remark has given the opposition bullets to put his employer - the Government and Dato Najib - in their firing range.

Since it is happening, shouldn't he be fired again?

Yes, I said fired again because it is nothing new for this over ambitious job hopper who carry no moss.

Posted by PUTRA MERDEKA at 3:29 PTG