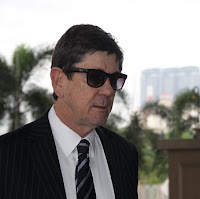 A blogger says that records of "a very important case" in Australia leave Dr. Brian McDonald's credibility "torn to shreds" .

The judge in that case -- in which DNA evidence was used to try to determine the paternity of a child -- is quoted by blogger PantaiReporter as saying, “At the end of Dr McDonald’s evidence-in-chief, I did not know from who or from where Dr McDonald obtained his claimed expertise in DNA and molecular genetics."

The blogger also writes, "In the following paragraph the judge went on to dissect the various qualifications that McDonald had presented to the court to back his expert testimony and concluded that he is not actually qualified to be an expert witness."

Anwar’s DNA expert suffers from CSI effect? CSI effect is where non experts feel they are expert on the basis of peripheral knowledge derived from a television series.

It seems that the defence’s DNA expert witness, Brian McDonald is not such an authority on the subject as he may have portrayed himself to be.


This is not the opinion of this author or anyone in Malaysia but the findings of four Australian judges in a landmark DNA statistic case R v Bropho.

In the Bropho case the court had to solely on DNA results and DNA statistics to determine the paternity of a child, Brian Mc Donald’s expert evidence was excluded by the court. The judge, Goetze, DCJ in paragraph 45 said:

“At the end of Dr McDonald’s evidence-in-chief, I did not know from who or from where Dr McDonald obtained his claimed expertise in DNA and molecular genetics. I still don’t know what it is that Dr McDonald knows or does not know about DNA and genetics, and importantly, about population statistics, which his regarded as a “rather esoteric little classification” (T203)”


By the way T203 refers to the paragraph in the court transcript where Dr McDonald made his remark about esoteric little classification.

Earlier in paragraph 42, the judge already hinted at his doubts in McDonald’s credibility, he said:
“That Dr McDonald could explain the terms does not make him an expert”

Further down in the written judgment, the judge explains that he is not alone in questioning McDonald’s qualification and expertise as the doctor himself had made it clear he does not have expertise in the subject he gave testimony in

In paragraph 49 of the written judgment, the judge said:
“Further, Dr McDonald accepted (T237 and T243) that he is not qualified and does not have the expertise to derive and validate a subpopulation model. He does not have the ability to follow the derivations in a subpopulation model (T273). He is not qualified to validate a database or to create a model in respect of a particular population (T243)

“Dr McDonald accepted, that, with respect to the relevant DNA issues involved in this case, that he has not written any papers nor given any lectures and has not been subject to peer review to determine whether his views are accurate or inaccurate (T246)

In the following paragraph the judge went on to dissect the various qualifications that McDonald had presented to the court to back his expert testimony and concluded that he is not actually qualified to be an expert witness.

It appears that McDonald has a bachelor’s degree in Science and a PhD and fellowship of the Human Genetcs Society but the judge paid little regard to the fellowship because the society’s constitution and by-laws do not provide for full fellowship, but only to accreditation and even the curriculum for the accreditation is still in draft form.

In fact the lack of qualification caused the judge to question how McDonald can be considered qualified to operate a pathology lab as prescribed by the laws of Australia.

“The only possible relevant course addition to Dr McDonald’s university studies as revealed in his curriculum vitae which he has done was in 1993, being the NATA assessor’s course in DNA testing laboratory accreditation, but which he said did not assess or accredit him in any way (T231). I am therefore left not knowing the basis upon which Dr McDonald is able to operate and accredited pathology laboratory within the meaning of s23DN ad s23DNA of the Health Insurance Act, other that that he is a senior scientist as definer therein.”

After reviewing testimony from other experts, the judge comes to an even more shocking conclusion that despite a lack of expertise in a particular area, McDonald found no difficulty in running down the testimony of real experts in the field.

“This explains why Dr McDonald is not an expert. He does not have the expertise to derive and validate a subpopulation model. He cannot follow the derivatives in such model. He has not attempted to follow the derivations of the subpopulation model used by Dr Buckleton in this case (T237). However, when he looks at the observed profiles against the expected or predicted profiles, he says that the model prepared by Dr Buckleton is “flawed” (T237).”

Does this sound familiar? McDonald has been doing his best to rubbish the results of testing done in Malaysian labs and the testimony of Malaysian experts.

In order to understand the mental state of McDonald, one has to look at his reputation in Australia as a DNA expert that sits on the fringe and tries to discredit the very industry he works in.

He relishes in poking holes at the arguments of established experts in Australia and powered by that motivation he has found Anwar the perfect client.

The Bropho case is a landmark case for DNA population models and yet McDonald continued to offer ‘expert’ testimony even though it is clear that he is very light in this department.

In conclusion the judge ruled McDonald’s evidence as inadmissible and this stance was upheld by a bench of three consisting the Chief Justice, MartinCJ, and Appeals Court judges Owen JA and Miller JA.

In paragraph 136 the judgment even made specific mention of the questionable claim of expertise that McDonald made through the non-existent fellowship. It said:

“In the circumstances, ther is insufficient evidence to persuade me that Dr McDonald is an expert in the subject area. Furhter ther is reason to doubt that his claimed fellowship in molecular genetects has in fact been bestowed by the Society, but , perhaps it has not been properly proven. Membership of the Society, without more, does not establish expertise [100], [103], [104].

In para 138 the judges made the following finding:

“The judgement of Goetze DCJ on the issue is detailed and thorough. He has analysed in every respect the shortcomings of Dr McDonald’s expertise and, in my opinion, he cannot be said to have adopted an overly narrow focus to the issue or to have scrutinised Dr McDonald’s the qualifications, awards and experience to rigorously.”

Like Dr Pronthip, Dr McDonald may be selling himself a little too high on qualification and relies too heavily on his reputation as a defence witness capable of poking holes in weak arguments in Australia as credentials for his expert testimony in the Anwar Ibrahim sodomy trial.

In fact yesterday, his testimony that semen traces can be found only up to 65 hours after it is left in the rectum was put in doubt when current expert opinion and studies indicate that it can last for as long as 113 hours.

Posted by PUTRA MERDEKA at 3:20 PTG