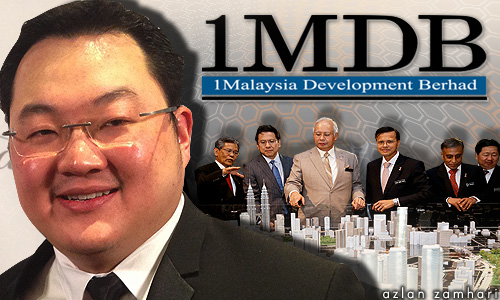 1MDB's US$1b default could trigger cross default on its other debts, says Arul

: If troubled 1Malaysia Development Bhd (1MDB) defaults on its US$1 billion loan from Abu Dhabi's IPIC, that could trigger cross defaults on the fund's other debts, including some bonds, according to the fund's president and group executive director Arul Kanda Kandasamy.
Though 1MDB has declared just four days ago that it is free of all its bank and short-term debts, it still has a RM5 billion sukuk with a government guarantee, another RM2.4 billion Bandar Malaysia sukuk, a RM800 million loan from the Social Security Organisation or Socso in short, and in his words, "the one that everyone is worried about", a US$3 billion bond the fund issued in 2013 to fund the Tun Razak Exchange development.
In an exclusive interview with The Edge Malaysia, published in the weekly's cover story for the week of April 25-May 1, a clearly frustrated Arul told the publication's Executive Editor Kathy Fong and Associate Editor Jose Barrock what had derailed the asset for debt settlement with IPIC, which he thought was a done deal and the final piece of the jigsaw to rescue 1MDB from its massive debt woes -- and what could happen next now with IPIC's declaration of default against 1MDB.
The binding term sheet 1MDB signed with IPIC in June 2015 got the cash-strapped 1MDB then the US$1 billion it needed to settle some immediate obligations, including a US$975 million syndicated loan led by Deutsche Bank AG.
There is one crucial item on the term sheet, which is that 1MDB has to transfer the amount that IPIC paid, the cash plus the interests — US$1.15 billion — by Dec 31, 2015, according to Arul. As such, he said: "actually, we were in default since December". But he questioned why IPIC waited until now to make the announcement.
"It should have been made immediately after the default as it’s a large amount. Why wait until April to say you don’t own Aabar BVI?"
As to the US$3.5 billion worth of payments that 1MDB made to Aabar BVI (Aabar Investments PJS Ltd), the company with the near identical name to IPIC's subsidiary Aabar Investments PJS, Arul said: "What we cannot discount is there could actually be fraud...a massive fraud...and maybe there was collaboration from our side".
He also spoke about wanting to quit 1MDB, and how the issues at the fund was not his and "not what I signed up for". "I'm very tired. I'm doing over and above what I had signed up to do."
Pick up a copy of The Edge Malaysia today from newsstands near you to find out what could have caused the IPIC-1MDB deal to turn sour, why 1MDB thinks that IPIC holds corporate responsibility too for the US$3.5 billion that was diverted into Aabar BVI for not calling foul earlier if it hadn't received the monies, and more.
Also, read about what the publication has to say about whether 1MDB was cheated or if it was a party to the fraud.
sumber
Untuk sekian kalinya...kertas takkan mampu membungkus api..!
Lu Fikir La Sendiri!!!
Posted by PUTRA MERDEKA at 3:19 PTG