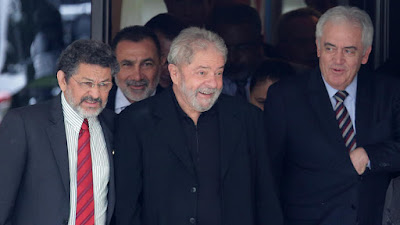 Kertas takkan mampu membungkus api..!
Prosecutors in Sao Paulo state have filed money laundering charges against former Brazilian President Luiz Inacio Lula da Silva, who is accused of hiding his alleged ownership of a seafront penthouse in the city of Guaruja.
Lula has denied he owns the apartment, which belongs to the construction company OAS. OAS is one of the biggest targets of a separate corruption investigation that focuses on state-run oil giant Petrobras.
The charges filed Wednesday against Lula still need to be accepted by a judge.
In a statement, Lula said that investigators “are not unbiased.” He still has not been heard by the state investigators in the case.
The decision comes days before an anti-government protest Sunday, and five days after Lula was held for questioning and his home raided by police.
latimes
Ada ketika..! Ada perkara..! Ada tempat..! ketiga tiganya bertemu...maka jadilah..!
Tunggu..!
Lu Fikir La Sendiri!!!
Posted by PUTRA MERDEKA at 11:39 PTG