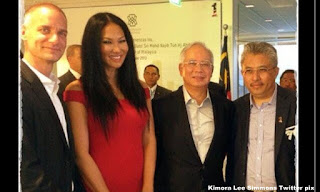 The Rise and Fall of Tim Leissner, Goldman's Big Man in Malaysia

The prime minister of Malaysia had a message for the crowd at the Grand Hyatt San Francisco in September 2013. “We cannot have an egalitarian society -- it’s impossible to have an egalitarian society,” Najib Razak said. “But certainly we can achieve a more equitable society.”
Tim Leissner, one of Goldman Sachs Group Inc.’s star bankers, enjoyed the festivities that night with model Kimora Lee Simmons, who’s now his wife. In snapshots she posted to Twitter, she’s sitting next to Najib’s wife, and then standing between him and Leissner. Everyone smiled.
The good times didn’t last. At least $681 million landed in the prime minister’s personal bank accounts that year, money his government has said was a gift from the Saudi royal family. The windfall triggered turmoil for him, investigations into the state fund he oversees and trouble for Goldman Sachs, which helped it raise $6.5 billion. Leissner, the firm’s Southeast Asia chairman, left last month after questions about the fund, his work on an Indonesian mining deal and an allegedly inaccurate reference letter.
Few corporations have mastered the mix of money and power like New York-based Goldman Sachs, whose alumni have become U.S. lawmakers, Treasury secretaries and central bankers. Leissner’s rise and fall shows how lucrative and fraught it can be when the bank exports that recipe worldwide. In 2002, when the firm made him head of investment banking in Singapore, it had just cleaned up a mess there after offending powerful families. It took only a few years before the networking maestro was helping the bank soar in Southeast Asia -- culminating in billion-dollar deals with state fund 1Malaysia Development Bhd., also known as 1MDB. But if his links to the rich and powerful fueled his Goldman career, they also helped end it.
“He has to know a lot of people, that’s just the nature of the business,” said Gerry David, president of Celsius Holdings Inc., an energy-drink company that counts Leissner and Hong Kong billionaire Li Ka-shing as investors. “He’s the type of person that I would honestly tell you I would really want as a friend, a personal friend.”
Leissner’s lawyer, Jonathan Cogan, didn’t respond to messages. Edward Naylor, a spokesman for Goldman Sachs, declined to comment.

Proximity to power is so prized at Goldman Sachs that a former co-head wrote it into his commandments for the firm: “Important people like to deal with other important people. Are you one?” The answer from lanky, blue-eyed Leissner seemed clear from his earliest years at the firm. He joined in 1998 and then became chief of staff to Richard Gnodde, president of the bank’s Asia operations and now co-head of investment banking.
One colleague from that era said Leissner was the kind of banker who could hop in a canoe, paddle upstream and come back with a fee. That person, who asked not to be identified, said Leissner could dazzle in other ways: When he married Judy Chan, whose father ran a coal-mining business in China, the wedding feast included suckling pigs with electric lights flashing in their eye sockets.
The firm learned a lesson about how to handle itself around power in Singapore just before Leissner got a big break there in 2002. In a presentation for a client bidding to take over a bank, Goldman Sachs advisers said that a rival deal was designed to keep powerful families in control while ignoring public shareholders. Regulators and local bankers were offended by the bluntness. Hank Paulson, chief executive officer at the time, flew to Singapore for damage control.
Leissner became the firm’s local head of investment banking a few months later. The banker, whose father was a Volkswagen AG executive in Yugoslavia during the Bosnian War before stints in Mexico and China, graduated from Germany’s University of Siegen and got an MBA from the University of Hartford in Connecticut in 1992.
At a 2001 gathering of young Asian leaders, the program listed him as Dr. Leissner for his workshop “What would happen had Einstein joined Wall Street?” A biography he provided at another forum said he got a doctorate in business administration from Somerset University. A school with that name offered degrees for $995, a retired federal investigator told a U.S. congressional committee on education in 2004.

Leissner’s contacts were more impressive. In May 2006, he was sitting onstage when the conglomerate controlled by billionaire Syed Mokhtar Al-Bukhary announced its takeover of power producer Malakoff Bhd., what it called “the largest acquisition ever undertaken in Malaysia.” Goldman Sachs was an adviser on the deal. That year, Leissner made partner.
The firm helped manage billionaire T. Ananda Krishnan’s 2009 initial public offering of Maxis Bhd., Malaysia’s biggest wireless operator. Krishnan also controlled Astro Malaysia Holdings Bhd., the largest pay-TV broadcaster, and Goldman Sachs was there when it went public, too.
Leissner was open about his ambition. The firm wanted to do more business in Malaysia, he said in an interview carried by a government news agency. That was before Najib became prime minister in 2009. By the end of that year, the nation’s securities commission cited the new leader’s “strategic shift” when it announced that Goldman’s application to start operations for fund management and corporate finance was approved.
That smoothed the way for the firm’s blockbuster deals with 1MDB, which began as an investment fund set up by oil-rich Terengganu state before Najib took it over. The government-owned entity attracted attention even in early days: Jho Low, a young dealmaker who advised the Terengganu Investment Authority and was a friend of Najib’s stepson, film producer Riza Aziz, popped up in tabloids celebrating in New York and St.-Tropez with Lindsay Lohan, Paris Hilton and magnums of champagne.
Goldman Sachs, where Jho Low’s brother Szen had worked, hit it big, too. The firm made $593 million working on three bond sales that raised $6.5 billion for 1MDB in 2012 and 2013, according to a person with knowledge of the matter, dwarfing what banks typically make from government deals. Leissner was an adviser to the state fund from early on, according to a former colleague familiar with the bond sales.
“There’s no law against bankers meeting with heads of state,” Wong Chen, an opposition member of Malaysia’s parliament, said in an interview this month about Goldman Sachs’s relationship with 1MDB. “That’s a bit too cozy, a bit too overly generous.”

"There were large requirements and Goldman was one of the few firms, in fact the only firm, that could provide the solution that was required,” 1MDB President Arul Kanda said in an interview Wednesday at his office in Kuala Lumpur. “Overall the objectives were met." He declined to comment specifically on Leissner.
The bank said last year that fees and commissions “reflected the underwriting risks assumed by Goldman Sachs.” A spokesman for Najib declined to comment for this story. Jho Low didn’t respond to e-mails.
Leissner became the firm’s Southeast Asia chairman in 2014. By then, he had met his current wife in business class on a flight from Hong Kong to Kuala Lumpur, with an argument in the beginning and a marriage proposal by the end, according to an interview they gave to a Wall Street Journal fashion columnist. She was previously married to Russell Simmons, who co-founded Def Jam Recordings.
His wife’s social-media accounts chronicle the couple’s jet-set life, from yachts in the Caribbean to Indonesia, where she thanked god for her police escort. The prime minister and his wife weren’t the only Malaysian leaders she mentioned: The queen, she said, was a fan. In 2014, Simmons told a reporter that one of her daughters wanted to be a banker and met Goldman Sachs CEO Lloyd Blankfein.

Anger about the Wall Street bank’s profit was overshadowed by controversy over whether the money 1MDB raised was spent as intended on local projects including a Kuala Lumpur financial center or siphoned off.
“I am not a thief,” Najib said last July, as investigators probed the hundreds of millions of dollars that were said to have shown up in his bank accounts.
Malaysia’s attorney general said in January that the prime minister got $681 million as a gift from Saudi Arabia’s royal family and returned $620 million. That month, Switzerland’s prosecutors asked for Malaysia’s help investigating 1MDB, saying they suspected $4 billion may have been misappropriated.
Goldman Sachs reviewed the deal too, finding no indication the firm or Leissner engaged in wrongdoing, two people familiar with the process said. Even so, the bank stepped up scrutiny of him after he worked with a group of investors last year trying to buy Newmont Mining Corp.’s Indonesian copper operations.
One of them, Sudjiono Timan, a former head of a government-owned brokerage convicted of corruption in 2004, created a problem. The firm told Leissner it wouldn’t move ahead if he was a sponsor, even though the conviction was overturned in 2013, two people familiar with the matter said. Timan withdrew, but Goldman Sachs pulled out of the deal when it learned he was still an adviser, the people said. The bank then examined Leissner’s messages and found a reference letter he wrote that it said in a regulatory filing was “inaccurate and unauthorized.”

The firm put Leissner on leave in January, and he resigned soon after. U.S. investigators subpoenaed him in February over the 1MDB work. The government told him he’s not a target, according to one of the people.
Authorities are exploring whether Goldman Sachs misled 1MDB bondholders or broke anti-corruption laws, the Wall Street Journal reported last week. Leissner recommended the firm hire the daughter of a close aide to Najib, according to the paper.
Goldman’s business in Malaysia, where it was one of the top banks four years ago, has fallen far. It ranked 17th for local mergers and acquisitions work last year, when it was credited with no equity or debt deals, data compiled by Bloomberg show.
Leissner moved to Los Angeles. His exit from Goldman Sachs is an “opportunity to be back home with the family,” according to David, who promotes his energy-drink Celsius as a “negative calorie beverage.”
An attempt this month to reach Leissner or his wife via intercom at the black gate of an $11 million Beverly Hills mansion was unsuccessful. The 9,405-square-foot house, which has seven bedrooms, nine bathrooms, a screening room, gym, tennis court and guest house, according to an old listing, is just north of Sunset Boulevard.
Last month, a few weeks after news broke that Leissner was on leave and in California, Najib returned to San Francisco. He was talking up his country, part of a tour called Invest Malaysia 2016.
“Under adverse conditions, we still perform pretty well,” the prime minister said. “We believe that performance can continue with policies that will not change.”
bloomberg
Lu Fikir La Sendiri!!!
Posted by PUTRA MERDEKA at 8:09 PG