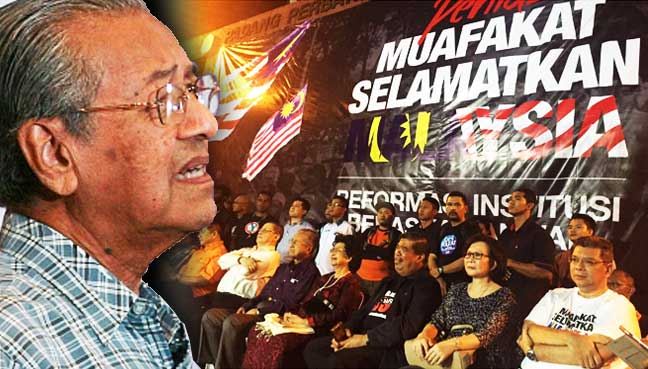 Boleh senak perut si Arul macam ni..!
Former Premier Dr Mahathir Mohamad wants 1MDB President Arul Kanda Kandasamy to show the money that he says the company has.
Mahathir said the debt-ridden, controversial, government-owned strategic investment company was far from healthy financially without physical money but with only “numbers in the accounts”.
‎”Arul says he saw the money. Arul, if there is money around, then show it to me… I want to borrow some, to buy bread,” he said, mocking Arul’s public statement that the company now had money to pay off its debts.
Prime Minister Najib Razak, who is 1MDB advisory board chairman, has come attack ever since it was shown that 1MDB had RM42 billion in debts.
Mahathir yesterday joined Opposition politicians in the first stage of the Save Malaysia campaign trail which will take him and other signatories of the Citizen’s Declaration on a nationwide tour to meet people and get signatures to pressure Najib to resign.
The 91-year-old politician took the spotlight yesterday and used his witty remarks and humorous quips to delight the 1,000 or so attendees at the Ampang Jaya City Council field near here.
Mahathir intensified his attack on Najib and his statements – from Najib’s initial denial and subsequent flip flop on the controversial RM2.6 billion political donation that went into the latter’s personal bank accounts.
“He said it was the Arabs who gave the money. Who can believe it? When I asked for money to build the Islamic University, my Arab friends gave me kitab (holy book).
“But they (Arabs) love Najib so much they gave him RM2.6 billion,” he said.
Mahathir urged the people not to be afraid of signing the Citizens’ Declaration, asking them to help save the country from going bankrupt.
He also said his former party, Umno, could not do anything to stop Najib any more as the leaders of Umno were indebted to the money politics in the party.