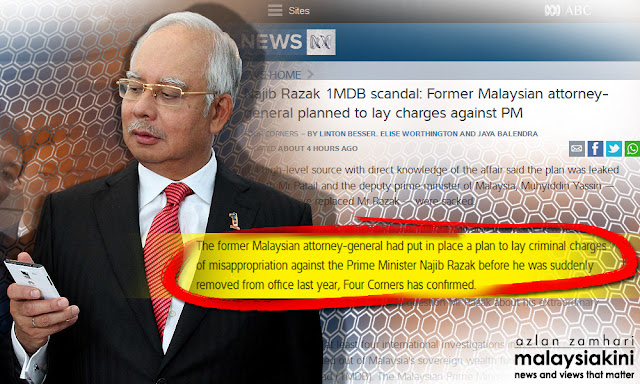 The Australian Broadcasting Corporation (ABC) will air the latest episode of its 'Four Corners' programme tonight, focusing on alleged financial scandals linked to Prime Minister Najib Abdul Razak.
The ABC in a report said the Four Corners investigation will broadcast new details regarding funds which has been deposited into Najib’s personal bank accounts.
Among others, it said that Four Corners has seen bank records which show deposits made between 2011 and 2014 from “mysterious individuals and companies”, both in Malaysia and overseas, via wire transfers and in cash.
The records supposedly show that in mid-2013, the bank had opened three new accounts in Najib’s name, as well as regular pledges of money from a Saudi prince, including a promise of 50 million British pounds as late as June 2014.
This, it claimed, was on top of the US$681 million (RM2.6 billion) donation from an unnamed Middle Eastern donor, from which attorney-general Apandi Ali said that Najib had returned US$620 million.
Apandi had declared that no charges would be brought against Najib and ordered the Malaysian Anti-Corruption Commission (MACC) to close three separate investigation papers related to the allegations.
However, ABC reported that Four Corners has confirmed plans by former attorney-general Abdul Gani Patail to lay criminal charges of misappropriation against Najib, before he was removed from office last year.
Najib has so far denied all allegations made against him.
The Four Corners team - journalist Linton Besser and videographer Louie Eroglu - were deported from Malaysia after having attempted to question Najib during a public event in Sarawak earlier this month.
A scene during the incident will be featured in the Four Corners latest episode titled ‘State of Fear’.
According to the ABC report, the episode will also feature interviews with former prime minister Dr Mahathir Mohamad, former de facto law minister Zaid Ibrahim and Sarawak Report founder Clare Rewcastle-Brown, among others.
Malaysiakini is still trying to reach Gani for his response.
sumber
Rupanya confirm bodo..!
Lu FIkir La Sendiri!!!
Posted by PUTRA MERDEKA at 4:15 PTG