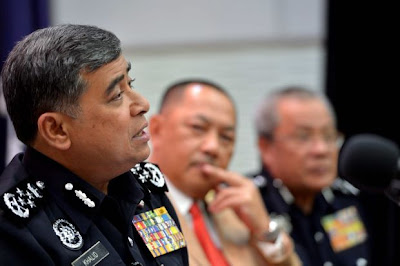 Inspector-General of Police Tan Sri Khalid Abu Bakar has decided not to press charges against a businessman who allegedly posted a death threat against him on Facebook.
Khalid said the suspect, 33, who is also a postgraduate engineering student would be released later on Saturday.
"I took a look at his background and the case and I decided to let it go. He's just a student. Though he has a loose mouth.
"Maybe he was just angry at the time when he posted the message. I hope he thinks next time before he posts anything," Khalid told reporters.
It was reported that the suspect turned himself in at the Cheras District Station 9.30am, from where he was taken to the Dang Wangi station to have his statement recorded.
"He will be remanded at the Dang Wangi station for four days for further questioning,” said Dang Wangi OCPD Asst Comm Zainuddin Ahmad.
The suspect allegedly wrote on Facebook, "Can anyone just hire gunman to shoot down this police or IGP".
Khalid advised Netizens not to let emotions get in the way of their postings online, because it could be misconstrued if it comes off as threatening.
Posted by PUTRA MERDEKA at 3:11 PTG