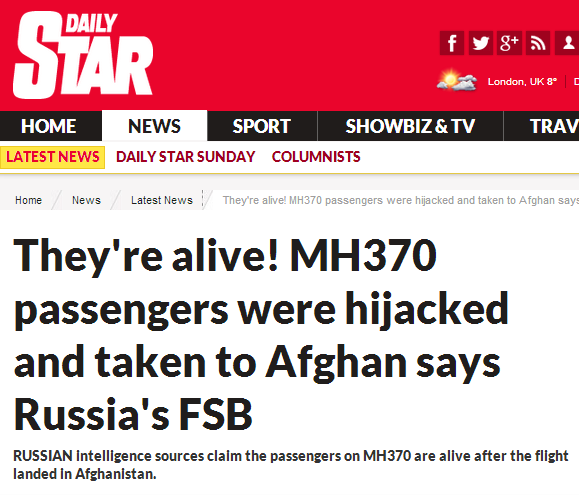 HUNT: The search for Malaysia Airlines flight MH370 has taken almost a month [REUTERS]
A source in the country’s FSB secret service said the plane has been hijacked and flown close to the Pakistan border.
The Boeing 777 has been missing since March 8 and it is thought the black box which holds the flight’s secrets may have run out of battery.
There are 239 people on board the Malaysia Airlines plane, which was flying from Kuala Lumpur to Beijing.
The source told a Russia newspaper: All the passengers are alive, they have been divided into seven groups and are living in mud huts with almost no food,” reported the Sun.
The report added that 20 passengers who were Asian “specialists” have been smuggled into a bunker in Pakistan.
Searchers looking for the missing plane have discovered new signals consistent with those emitted by black boxes in the southern Indian Ocean.

SEARCH: Ocean Shield found signals that could be promising [EPA]
They have been searching for the wreckage for more than a month and recent “pings” emitted by the black box have been the best lead so far.
Black boxes’ batteries typically run out of battery a month after an accident.
Angus Houston, the head of a joint agency coordinating the search, said that the Australian navy's Ocean Shield picked up the two signals.
She added: “I'm now optimistic that we will find the aircraft, or what is left of the aircraft, in the not-too-distant future – but we haven't found it yet, because this is a very challenging business.”
The Australian’s picked up other signals earlier this week. But Chinese searchers also detected “pings” – 345 miles away.
The disappearance of Malaysia Airlines Flight 370 on a trip from Kuala Lumpur to Beijing has sparked one of aviation's biggest mysteries.
The search has shifted from waters off of Vietnam, to the Strait of Malacca and then to waters in the southern Indian Ocean as data from radar and satellites was further analysed.
sumber.dailystar.They-re-alive-MH370-passengers-were-hijacked-and-taken-to-Afghan-
Posted by PUTRA MERDEKA at 9:11 PTG