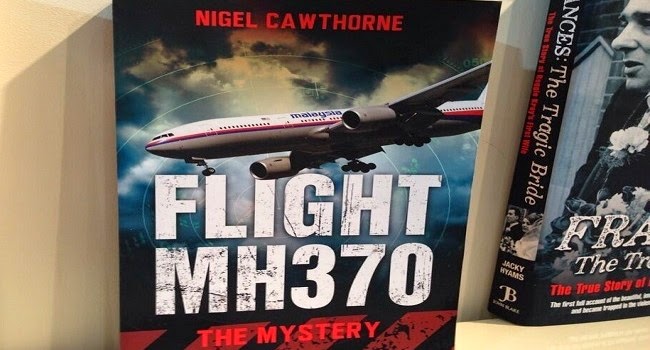 The disappearance of Malaysia Airlines Flight MH370 has entered its 33rd day.
However, the short time span was enough to propel fiction writer and journalist Nigel Cawthorne to pen a book on the incident.
Slated for release on May 15, a picture of the book photographed at the current London Book Fair has been making its rounds on social networks.
Titled Flight MH370, The Truth is published by Blake Publishing.
While investigators are still attempting to piece together what happened to the aircraft as well as focus on the pings detected in the southern Indian Ocean that could be from the flight’s recorders, it remains to be seen what exactly are the contents of this book by Cawthorne.
Cawthorne, according to his biography, is also a contributor to several British news publications such as The Guardian, The Daily Telegraph as well as much criticised The Daily Mail.
He is also known for penning a series of books on sex lives, namely Sex Lives of the Popes, Sex Lives of the Famous Lesbians and Sex Lives of the Roman Emperors, among many others.
Also to his name are books titled Amorous Antics of Old England and Sex Secrets of Old England.
A check on the UK Book Depository website, listed the Flight MH370, The Truth book as being in paperback form with 288 pages.
“Experienced author and journalist Nigel Cawthorne has researched the case with incredible thoroughness, revealing the most compelling explanations behind the mystery gripping the world,” read the synopsis on the book depository site.
Flight MH370 disappeared shortly after it exited Malaysian airspace on March 8 en route to Beijing.
The plane was carrying 227 passengers and 12 crew members.

Posted by PUTRA MERDEKA at 4:57 PTG