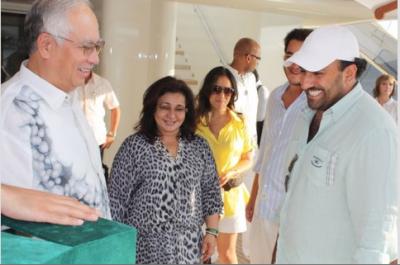 All the key players in the 1MDB Aabar scandal, which also concerns the disappearance of US$1.4 bn
Top level discussions are currently under way in Abu Dhabi over what to do about the embarrassing legacy of the former Chief Executive of the sovereign wealth fund IPIC, who enmeshed the emirate in the scandal of 1MDB.
Khadem al Qubaisi was sacked in April, following Sarawak Report’s revelations about his double life and the mysterious multi-million dollar payments received by him from none other than Jho Low’s dodgy company Good Star Limited, which is now known to have siphoned over a billion dollars out of 1MDB.
However, this has by no means cleared up the mess he has left behind.
The key problem facing the fund’s new decision-makers is what to do about IPIC’s subsidiary Aabar and it’s secretive and highly questionable contracts with 1MDB?
In particular 1MDB has reported a payment to Aabar of US$1.4 billion for its role in structuring its power purchase loans in 2012. Yet there is no record at IPIC of ever having received that huge sum of money, which has simply disappeared.

“It [Aabar] was remarkably like 1MDB in its purpose, I would say” explains one observer of the situation, “operating like a slush fund separately to the main sovereign wealth fund itself, using the backing of IPIC to support wealth creating deals for individuals under the Chairmanship of al Qubaisi.”

So, no surprise that Aabar and 1MDB found a perfect partnership in brokering three major bond deals that generated a whopping US$6.5 billion between 2012 and 2013.
It is more of a surprise that all three of these remarkably shady bond issues were managed by Goldman Sachs, sparking comment at the time about the vast fees commanded by the bank — a matter that is again receiving scrutiny now that the problems at 1MDB have become more acute.
The terms of these private bond issues were kept completely under wraps until Sarawak Report obtained the issue document for the purchase of Tanjong Energy, which showed the unusual way in which Aabar had been brought in as a co-guarrantor of the loan that was entirely raised by 1MDB.
It meant that less than half the total money raised actually went to 1MDB and much of the rest is now missing.

Bail out or pull out — Will Abu Dhabi cut loose or dig in deeper?

According to Abu Dhabi watchers, Al Qubaisi’s rogue role at Aabar and IPIC was becoming obvious by the start of this year, just at the time that 1MDB was struggling to repay its debts.
Aabar itself has been losing staggering sums of money on what appear to have been a series of incoherent and outlandish investments.
The Virgin Galactic project was one, which exploded with the loss of its test craft last year.
And the construction subsidiary Arabtec has also proved a disastrous investment for Aabar, as has Glencore, a commodities trader whose share price has plummeted 70% since Aabar invested a billion dollars in 2011.
As a result, Aabar’s original war chest of US$70 billion has now depleted to well under US$15 billion under Khadem Al Qubaisi, say business insiders.
We understand that Al Qubaisi was put under house arrest and then sacked and sent abroad after losing his positions in April.
However, the fund went on to make one further stunning and controversial investment under Al Qubaisi’s former right hand man Mohamed al Husseiny, who remained as Chief Executive.
This happened in June, when Najib Razak was desperately looking for an immediate bail out of 1MDB to avoid the fund going bankrupt. Al-Husseiny agreed to a provisional arrangement whereby Aabar would put up the entire US$3.5 billion needed to manage the Malaysian fund’s outstanding debts for another year.
The agreement involved a cash deposit by Aabar of US$1 billion to replace funds suddenly withdrawn by an earlier Deutsche Bank consortium, which had pulled out of lending after discovering they had been falsely informed that 1MDB had cash in BSI Bank in Singapore.
Why did Al-Husseiny perform this service? Najib subsequently bragged to cabinet ministers about how easily he could raise any money he wanted in the Middle East in such ways and it was a key weapon in his fight back as the 1MDB scandal unravelled.
Yet, it is clear that others in Abu Dhabi are not comfortable with the situation. Al-Husseiny is plainly a conflicted figure, liable to pressure from Najib, given his intimate involvement alongside his ex-boss al Qubaisi in the business deals with Najib and 1MDB.
These include not only the power purchase bonds, but the Falcon Bank transaction of US$681 million into Najib’s KL personal account at a time when Al-Husseini was Chairman of that Bank.
It also includes the fact that it was Al-Husseiny himself who had publicly claimed he paid the US$100 million to fund Najib son Riza’s production of Wolf of Wall Street back in 2013.
Indeed, after Sarawak Report pointed out these controversial matters Al-Husseiny also found himself dismissed from all his various posts relating to IPIC and Aabar last month, creating enormous uncertainty over the terms of agreement he signed over this bail out deal, which has yet to be ratified.
This was despite the fact that Al Qubaisi had long been regarded as ‘protected’ because he had acted as a right hand man for Sheik Mansour a younger brother of the ruling Emir.
And over the past few days there have been leaks that the new managers at Aabar are ready to exercise their option to pull out before the end of the month. Insiders told the Singapore Business Times that the deal was as good as dead.
Sarawak Report understands that this would mean that the US$1 billion deposited under the terms of agreement would be immediately repayable by 1MDB, potentially triggering an immediate collapse of the debt ridden fund.
The CEO of 1MDB Arul Kanda has angrily rejected that the deal was not solid. However, he too has admitted the matter is not sealed, as he had earlier given Malaysians to understand, but rather still subject to negotiation.
So, it leaves an entirely new management now at IPIC/ Aabar to decide whether they will continue to bleed money into 1MDB and engage in what is developing into a growing international scandal over the missing billions — or cut their losses and pull out of ratifying the terms of agreement at the deadline at the end of the month.
According to informed Malaysian sources on taking over at Aabar the interim Chairman had picked up the phone to question Najib, as the man in charge of 1MDB, over what had happened to the US$1.4 billion that Aabar was supposed to have been paid?
What with plummeting oil prices and Aabar’s own huge losses, such sums are no longer small beer even for the rich Middle Eastern oil state.
Najib, is said to have reacted rudely and furiously to such questioning from the new man in charge at Aabar. After all when a Prime Minister is also a businessman, he nevertheless expects to always be treated only as a Prime Minister.
It remains to be seen if Abu Dhabi will bow to such grandeur and decide to fork out even more billions, in the hope that a bail out of 1MDB can bury the rest of its bad news.
If not, perhaps Najib has already lined up another generous middle eastern ‘donor’?
Originally published at www.sarawakreport.org.
sarawakreport
Makin demam la pak aji tu..!
Lu Fikir La Sendiri!!! 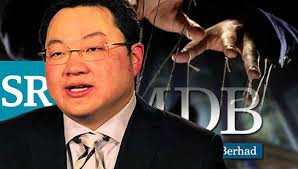 Posted by PUTRA MERDEKA at 3:39 PTG