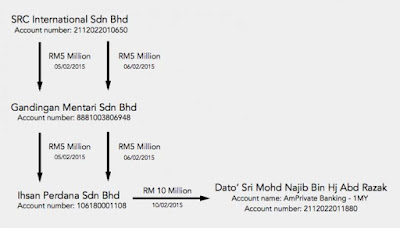 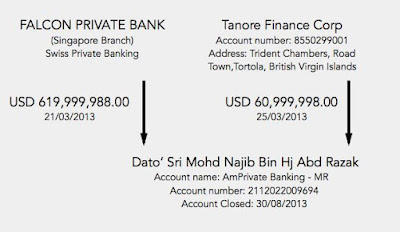 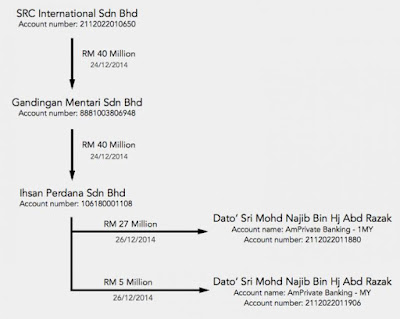 Najib Negotiates His Exit BUT He Wants Safe Passage AND All The Money! EXCLUSIVE DISCLOSURE

The new Attorney General Mohamed Apandi may by now be wishing he had not taken the job.
His predecessor was unconstitutionally booted out by the Prime Minister in July for bringing forward charges based on the purloining of millions from the pension fund KWAP into Najib’s own private accounts.
Now the Malaysian Anti-Corruption Commission (MACC) has completed its investigation into the matter and placed a dossier on Apandi’s desk, which according to several sources, contains no less than 37 separate charges against Najib, based on the same evidence.
Moreover, Apandi is aware that this evidence has now been widely distributed and is known to all the top brass in UMNO, making a protracted cover-up extremely hard to achieve.

In November this AG had issued a bald lie following the brutal kidnap and shocking murder of Kevin Morais, who had been the public prosecutor tasked with drawing up the original charges for the MACC.  Apandi stated that Morais had had no role in the investigation.

However, it is now widely established that Kevin was indeed the key prosecutor on the case and he is believed to have been the source of the leak of the original charge sheets drawn up against Najib to this news portal.
Before he was abducted (and on the advice of Sarawak Report to the then anonymous whistleblower) Morais also sent the contents of his laptop file on the investigation to a number of trusted confidants – these are now waiting to see if Malaysia’s own forces of law and order are going to do their job or if they will need to release the information separately.
It makes for a difficult situation for Apandi and Special Branch are known to have been trawling the friends and relatives of Kevin Morais in an unsuccessful bid to secure the return of these sets of documents.
Since these authorities seized the relevant laptop from Kevin’s flat shortly after he was abducted, they are also fully aware of just how much information was passed out by the whistleblower before he was silenced.  He himself had explained his motives in a series of emails to Sarawak Report at the time.  His sentiments included these words on behalf of those in the civil service trying to bring out the truth:

““The police continue to be rather aggressive in trying to uncover the sources of the leaks. And not actually trying to nab the lunatic on top of the pyramid, running this country to the ground just so his arse is saved… and I’m not sure if we’ll be able to stop this lunacy.”

The information now thus at large from the investigation is said to include copies of the bank statements showing how RM42 million, which was passed into one of Najib Razak’s personal accounts from 1MDB, under the auspices of “Corporate and Social Reponsibility” payments, was actually spent by the Prime Minister.
It was back in July that Sarawak Report together with the Wall Street Journal published details from the 1MDB investigation that showed the exact trail of the money: an original RM4 billion had been borrowed from the KWAP public pension fund by a subsidiary of 1MDB named SRC International Sdn Bhd; then between December 2014 and February 2015 a total of RM42 million was siphoned out of SRC through two intermediary companies controlled by 1MDB executive Nik Faisal Ariff Kamil (Gandingan Mentari Sdn Bhd) and Datuk Shamsul Anwar Sulaiman (Ihsan Perdana Sdn Bhd).  The latter has already been arrested and interviewed by investigators, whilst Nik Kamil has fled to Jakarta.

Najib has said that none of this public money was spent on personal things.  However, those who have seen the relevant bank statements have told Sarawak Report that there were several expensive shopping items recorded, many bought on foreign trips.
The whistleblower himself had detailed to Sarawak Report during email correspondence in August:

“Actually, the spending .. was rather mundane. Credit card bills, shopping, suppliers to the last elections that had not gotten paid because BNM had frozen the accounts of other proxy companies, that sort of stuff.”

It is the shocking source of this money that is most damaging in this case – public pension fund money, which was spent by the Prime Minister on his family’s notorious ostentatiousness and extravagance abroad.  Can it get worse than that?
Unfortunately, the answer is that yes it can and it is the further evidence against Najib which is making the situation even more impossible for the Prime Minister and his allies to contain, not least because whilst the SRC scandal is localised, the other graft allegations involve massive dollar currency transactions and implicate foreign banks, which the FBI and other international regulators are now publicly investigating.

Indeed, for the Najib loyalist Apandi the problems merely begin with that MACC dossier, which has been sizzling on his desk since before Christmas, awaiting action.
On top of those 37 charges relating to SRC International there remains the issue of the far larger sum of money paid from a number of mysterious off-shore entities into a separate AmBank account belonging to the Prime Minister.
Sarawak Report and the Wall Street Journal have also published the details of two of those payments, made from a BVI entity named Tanore Finance Corporation just before the general election.

Sarawak Report has further detailed how the money came into Najib’s AmBank account, via the Abu Dhabi Aabar fund’s Falcon Bank, just days after Goldman Sachs had negotiated a massive US$3 billion bond issue in order to fund a supposed strategic partnership between 1MDB and Aabar.
Records show that much of the money from the series of bond deals between these two funds has gone missing and the Chairman of Aabar was sacked shortly after the 1MDB scandal broke last year.
What is now widely known in UMNO’s upper circles, thanks to further investigations by Malaysian task forces, is that this RM2.6 billion transaction in March 2013 was just a portion of the money which went into Najib’s same AmBank account during the period after 2011.

As Sarawak Report has already pointed out, there were at least two further sets of payments again worth billions of ringgit.
Most of this money, which Najib now claims was supposed to help UMNO win in elections, was never spent.  The majority was sent back to into Najib Razak’s private account in Singapore straight after the election was over and the KL account was closed.
These facts, now widely known within UMNO’s top circles, make a mockery of the lame and unsubstantiated excuse eventually provided by Najib that this was money donated by an anonymous Middle Eastern royal, who was supposedly in the habit of handing vast sums to friendly foreign politicians to assist in their elections.
Not only would such a secret private political donation by a foreign potentate have been illegal, but the money plainly ended up in Najib’s private foreign bank accounts, where much of it remains frozen in Singapore.
The UMNO warlords have now acquired all the details, Sarawak Report has been reliably informed – and they are naturally furious on all counts.  This is a genie that cannot be returned into the bottle.  One UMNO insider has told Sarawak Report that all the party bigwigs now know:

“He didn’t just take the famous RM2.6 billion, it was RM4 billion and more”!

The game is up, but has Najib grasped the new realities?

It is because of this intractable mess that, behind a facade of UMNO unity and relentless PR about the ‘crisis being over’, stealthy talks were carried out at the highest levels in a series of locations over the New Year holiday break.

“Appearances are being maintained”, one insider told SR, “there have been the usual lavish events and appearances and of course Rosmah is still determined not to let go, but there have been negotiations in Tokyo and Dubai.  Najib knows the game is up, but he does not appreciate the reality of his situation.  He is a dead duck and yet he is trying to negotiate a safe exit along with a guarantee of all the stolen money!  The others will not agree.”

There are other factors prolonging Najib’s stay in office.  UMNO’s top brass may have agreed that he must go, but they are fighting over who succeeds.  Zahid has made clear that he aims to take over from his Deputy Prime Minister’s position.  However, others have pointed out that this forceful politician was promoted by Najib himself in response to the corruption crisis, replacing the Deputy Leader of UMNO, Muhyiddin Yassin, now banished from the inner circle of government and therefore far less contaminated by events.
The UMNO constitution also demands that it is the party that should choose its leaders, which puts Muhyiddin Yassin in line for the succession, not Zahid.  Thus the arguments are not about whether Najib should go, but over who should succeed him and on what terms Najib should leave.

The other major sticking point delaying Najib’s departure is the thorny issue of his criminal actions.  The Prime Minister knows the game is up, say insiders. With the economy in free fall and the country enmeshed in top-down corruption, he sees little glory either to be gained from hanging out for a further election win.

“He wants out, but he can’t get out”  speaks another source. “He has run the economy into the ground and has charges levelled against him, but he still thinks he should get a royal goodbye”.

Plenty of others would like to see Najib and Rosmah both jailed.  After all, the money in Rosmah’s own frozen accounts in KL is also in the order of hundreds of unexplained millions, with plenty of stories in the wings relating to crony contracts and the exploitation of public funds.
Yet the ‘First Couple’ are not only hanging out for full immunity and safe passage abroad in the course of the on-going negotiations with their colleagues, they also want to keep the dosh!

UMNO warlords who have failed to see eye to eye with Rosmah on this matter are said to have found themselves treated to scurrilous accusations from her client blogger, the UK-based ‘RPK’, a form of retaliation which has not been appreciated.
The present deadlock has been further strengthened by the fact that Najib appears to have encountered a worrying shortage of willing foreign bolt holes.  Turkey has rejected his asylum request and various Middle Eastern countries have simply failed to reply to his entreaties.
The much vaunted Kazakhstan is apparently not actually Rosmah’s kind of place.  Besides, the couple’s new in-laws, while not lacking in pretension, are regarded as persona non grata with the powers that be.
What all this means is that beneath the apparent calm awaiting Najib’s presentation of his gloomy, revised 2016 budget (a stark recognition of the dire state the economy has reached under his watch) there is an explosive situation waiting to erupt.  When it does, the changes are likely to come quickly.
Yet, whilst all this festers, insiders have told SR, Najib is falling prey to every political and financial demand. The wounded PM can’t say no to anybody as he attempts to shore up his support:

“Everyone is going for bribes and contracts and then when that is not enough they come back for more bribes” detailed one disgusted onlooker.  “They are feeding on the carcass of Malaysia’s blighted economy, while Najib tries to stay in office that little bit longer”

It is a given of politics that once a Prime Minister starts to open even the discreetest of negotiations about his exit there can really be no going back. But, how this fraught situation will be ultimately resolved and what will happen to Najib when the dam bursts is still a guessing game for the insiders, who have been speaking to Sarawak Report.