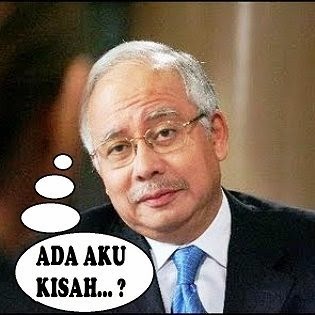 Well Najib predicted that Spain would win the World Cup. Spain was eliminated in the first round. Why did Najib pick Spain? Because one of his World Cup advisors told him that Spain was at the top of some European League or something. Nothing more complicated than that from Mr Bird Brain. (No apologies folks, this is our PM ok. We cannot have kindergarten kids in the PM's office. This is for real. Lead or get out of the way.)

Dont know if the late night World Cup games (which the PM has been watching, he has nothing else to do) are responsible for the spate of totally moronic comments by the PM, the Ministers and BN leaders. Here is a sampling :

KUALA LUMPUR, July 9 — Sabah lawmaker Datuk Bung Moktar Radin remains unrepentant after Germany’s ambassador to Malaysia chided him over his Twitter salute to Adolf Hitler today
The Barisan Nasional (BN) MP continued to mention Hitler in his tweets, even reposting one update by his follower which lauded the Nazi dictator’s ethnic cleansing of Jews during World War Two.
Germany’s ambassador to Malaysia had objected to Bung’s salute of Hitler in his praise for the country’s performance in the World Cup, saying the comparison was “unacceptable”.
In a statement emailed to The Malay Mail Online, Michael said the embassy “strongly rejects” the reference made by Bung, who said earlier today that the German team had “fought like Hitler” in the semi-final match this morning.
The rest of Bung's remarks are too stupid for me to comment on. Perhaps only IKIMs "we dont believe in democracy" suggestion is dumber than Bung.

2. Jamil Khir Baharom the Class A dunggu Minister was rumoured to be dropped during the recent Cabinet "reshuffle". The guy survived and keeps making even more stupid statements. He says Muslim food shops should not sell food to Muslims before 3PM because that would encourage people not to fast. If they dont want to fast, dia punya pasal lah. There is no way of proving even if Jamil Khir fasts. You can never know.

As that mamak restaurant association fellow said young children, menstruating women, travellers and the sick need not fast. They can still buy and eat food at any time. Plus Jamil Khirs ban does not apply to McDonalds, KFC, Pizza Hut etc. Because those are owned by big corporations. So why did Jamil make that stupid statement? Its an oxymoron question. Because he exactly that.

3. Now Najib says that Brazil lost 1-7 to Germany because their team did not have leadership.
"When I watched Brazil, their defence was all over the place. I put it down to lack of leadership. There was no proper leadership," he was quoted as saying.

I agree that Najib has been absent during several pressing matters in the country. He maintains the most non elegant silence.

I agree that under Najib, Malaysia is going down further in all the corruption indices.

And yes the Asianomics Country Report (which I believe is fed information by turncoats from inside Najib's circle)  have despaired at Najib’s lack of leadership.

The global economics report today painted a dark picture for Malaysia, predicting failure for the second phase of Putrajaya's economic transformation plan due to Najib’s lack of will.
Haiyya, panjang nya list dia. Berbuih mulut nak baca. Here is the gist folks, the PM is a clueless dud. That is what this Asianomics Country Report is saying.

Now this Asianomic Country Report may not be known to many of us because we dont read too much. But apparently this report is not unknown among the foreign financial analysts, international stockbrokers and such. More importantly what they say is true to a large extent. The PM is a clueless dud.

Here is another appeal to The Elders. The PM has to go. Where? How about home? Where the antelope play and the wife can learn to cook or something. She refused the Nepal sabbatical.

My Blog is just kuchi rat. But papers like the Asianomics Country Report can put a dent in the money peoples' confidence in our country.

I think I know what needs to be done for this country. From reading your comments, so do many, many of you. Unfortunately we have let the inmates take over the asylum. That is our problem.