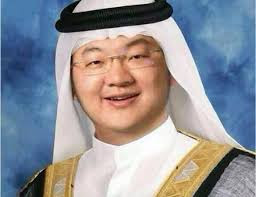 Oops! Why Did 'Saudi Royal' Use Eric Tan To Set Up Offshore Company To Pay Najib?

Rather than send money to Aabar, however, the 1MDB fund ended up transferring $3.5 billion to a different company with a name nearly identical to Aabar’s, according to the report by Malaysia’s parliamentary committee.

Some of that money in turn was transferred, via intermediaries, to a shell company called Tanore Finance Corp., registered in the British Virgin Islands, investigators in two countries believe.

The beneficial owner of Tanore when it was first set up was Tan Kim Loong, a young Malaysian business associate of Mr. Low’s, according to people familiar with the matter. Attempts to reach Mr. Tan were unsuccessful.

Global investigators believe it was from Tanore that $681 million was transferred to Malaysian Prime Minister Najib’s accounts at AmBank in March 2013, according to the people familiar with the investigations.

Source: Oops! Why Did 'Saudi Royal' Use Eric Tan To Set Up Offshore Company To Pay Najib?, Wall Street Journal

The piece of new information in this long article was that the beneficial owner of Tanore Finance Corporation, a company set up by Aabar’s Falcon Bank in October 2012, was Tan Kim Loong, whom a “person familiar with the matter” had informed WSJ was an associate of Jho Low.

Did WSJ fail to spot the significance of this name?

As SR has pointed out in previous articles, Eric Tan was a key fixer for Jho Low and is currently under investigation by the Singapore authorities.  In particular he organised with suspended Singapore banker Yak Yew Chee for US$20 million dollars to be wired by a Jho Low company Acme Time to PetroSaudi’s Tarek Obaid.

This means that the same fixer, who channelled millions from Jho Low to Tarek Obaid, who was linked to 1MDB through the PetroSaudi deal, was the man who incorporated Tanore Finance Corporation and gave it an account at Aabar’s very own Falcon Bank, which was linked to 1MDB via a different Abu Dhabi deal.

What a mighty bloody coincidence – given that Najib is still swearing that this money had come from a Saudi Royal figure!

Did WSJ miss the full significance of its own scoop? Looks like it!