Rosmah Mansor is wife of the prime minister, owns a $200,000 crocodile Hermes Birkin bag and is believed to use (and possibly abuse) as much power as her husband.

Of the numerous individuals engulfed in the vast Malaysian embezzlement scandal that includes a cameo by Leonardo DiCaprio, Najib Razak undoubtedly is the most prominent. The meek-looking Malaysian prime minister — widely acknowledged to be "Malaysian Official 1" in a record-breaking U.S. Justice Department complaint — is the man at the helm of the 1MDB sovereign wealth fund, now alleged to have been used to plunder billions of dollars of public money that lavishly flowed into the U.S., spent on luxury properties, artworks and, of course, DiCaprio's hit 2013 drama The Wolf of Wall Street.
But eyes are increasingly turning to the larger-than-life figure often by Razak's side: his bouffant-haired, Birkin bag-loving wife, Rosmah Mansor. It's Mansor, 64, who, through her first marriage, is the mother of Riza Aziz, the co-founder of Red Granite Pictures and producer of the DiCaprio starrer, and it's Mansor who is the connection to Jho Low, the controversial businessman who helped set up 1MDB and allegedly diverted billions into his own pockets and those of his associates (including Red Granite).

And it's Mansor who many have long suspected to be wielding just as much power — if not more — as her husband. When late Singaporean prime minister Lee Kuan Yew made an official state visit to Malaysia shortly after Razak entered office in 2009, he made a point of meeting Mansor separately, explaining that they ran the country as a team.
Reports recently emerged that the first lady of Malaysia (a controversial title Mansor bestowed upon herself, along with her own unit in the PM's office) had racked up at least $6 million in credit card charges in less than seven years, with shopping sprees at Saks Fifth Avenue and Harrods among her purse-busting blowouts.
But the news caused little shock in Malaysia, where Mansor's fondness for diamonds and Hermes bags (she reportedly boasts one of the biggest Birkin collections on the planet, including a bejeweled crocodile skin design costing in excess of $200,000) widely is known and ridiculed.
"Imelda Marcos had a fetish for shoes, whereas our friend here has a thing for bags," says Hishamuddin Rais, a Malaysian filmmaker who attended the same school as Mansor. He describes her as a combination of a "femme fatale and Lady Macbeth." Like Rais, Mansor's parents were teachers, but he says she has long since rejected her middle-class roots and even several family members (including her own daughter).

Robert De Niro on His Connection to the Malaysian Corruption Scandal: "I Don't Give a Shit"

Mansor's first husband, Aziz's father, reportedly was ditched because he "wasn't ambitious enough." And before she hooked up with rising politician Razak in the '80s, there were rumors the social climber had eyes for the Sultan of Brunei. "Anything that comes out about Rosmah is always believable," says Rais.
For political cartoonist Zulkiflee Anwar Ulhaque — better known as Zunar — Mansor's image is a "godsend." His numerous cartoons depict her as a woman with huge hair and an ever-present sparkling rock on her finger.
"For me, she's the most powerful individual in Malaysia — she's the one who decides on everything," he says.

Malaysian cartoonist Zunar is facing charges of sedition thanks to illustrations like this one depicting Rosmah Mansor on a shopping spree at taxpayers’ expense. Credit Zunar/Malaysiakini
Both Rais and Zunar are facing charges of sedition in Malaysia for their outspoken views, with Zunar facing a record nine charges carrying a possible sentence of 43 years in prison.
But while you can get away with cartoons of Prime Minister Razak, he says it's actually Mansor where the line is crossed.
hollywoodreporter
Bangga la tu dapat perhatian dunia..!
Hidup jangan melampaui batas..!
Lu Fikir La Sendiri!!! 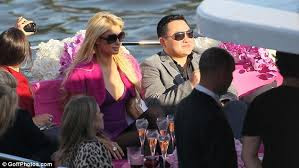