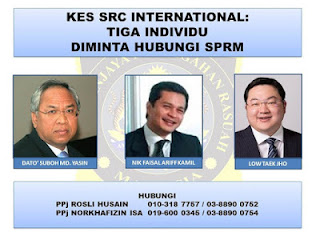 سْمِ اللهِ الرَّحْمٰنِ الرَّحِيْمِ "In the name of God, the Most Gracious, the Most Merciful

PROLOGUE: The former Perak Menteri Besar, (Datuk Seri) Mohammad Nizar Jamaluddin has apologised to Prime Minister (Datuk Seri Mappadulung Daeng Mattimung Karaeng Sanrobone) Mohd Najib Abdul Razak Datuk Seri Najib Tun Razak over a disparaging remark he made in 2012. – The Star Online.
***
THE KULAI, Johor Member of Parliament, Teo Nie Ching had described as downright “appalling” the leniency shown by the Malaysian Anti-Corruption Commission (MACC) towards two directors of SRC International.
[REMINDER: No anonymous comments will be published.  Please use Google Account, OpenID or Name/URL. Pseudonym is accepted. Be respectful. No swearing. Thank you]
The two persons referred to by the DAP lawmaker are lawyer Nik Faisal Ariff Kamil and former top civil servant (Datuk) Suboh Md Yasin. They are wanted in the corruption probe implicating the Prime Minister.
Among the many questions begging answers are:
1. Is it true that Mohd Najib and possibly the two “missing” persons ware on the verge of being charge for allegedly misappropriating RM42 million belonging to SRC International when then Attorney General, (Tan Sri) Abdul Gani Patail, was abruptly relieved of his job on July 27 last?
2. Did Nik Faisal and Suboh lelf the country on their own free will or were they told to leave the country when the news of their impending arrest by the MACC leaked out?
3. It is true that Nik Faisal and Suboh are hiding in Indonesia under the protection and patronage of some very influential people there?
4. Is it true that the two fugitives are willing to meet the MACC investigators in a foreign country (not Indonesia) but “were stopped” by their “handlers” in Malaysia?
Teo also described as “ridiculous and completely unacceptable” Mohd Najib’s explanation that the two men were absence because they were “making preparations to be interviewed by MACC soonest.
It is widely believed that the Nik Faisal Suboh are under some sorts of “protective custody” in Indonesia to avoid them from talking to the MACC or being clandestinely shanghaied by the latter.
I can believe the theory that they are in the protection of some powerful Indonesia personalities but I cannot believe that the MACC would dare risk a diplomatic scandal by clandestinely apprehending and transporting the two back to Malaysia.
The Malays have a proverb that says “berani kerana benar, takut kerana salah.” Roughly translated it means you dare because you’re in the right and you fear because you’re in the wrong.
Logically, since these two men are Malays and Muslims, they should not run away if they have not done anything wrong. But the very fact that they absconded from the country suggests that they have something to hide.
If they have nothing to hide and are free to act on their own, they should clear their names and the good name of their families by presenting themselves to the MACC.
They have been missing since July. The MACC issued an appeal by the latter on August 22 requesting them to present themselves for interviews.

Speaking at a press conference at the Parliament House on Oct. 29, Teo said it was unheard of that preparations for an interview should take three months and demanded Najib take stern action against them immediately, failing which their absence would be seen as being “sanctioned” by him.
The talk about these people and others - like 1MDB’s President Arul Kanda Kandasamy and Jho Low - needing time to prepare for the MACC interviews could be a delaying tactic to give 1MDB enough time to restructure and regularize its books.
The fact that Nik Faisal and Suboh are wanted in connection with SRC International and absconded strengthens the assumption that it was the SRC International’s case that Abdul Gani was brining to court when he was unceremoniously booted out.

Abdul Gani could have made a tactical error by hesitating and by consulting too many people in his decision-making.

He was believed to have consulted several Malay Rulers, former law and legal officers and retired Umno/Barisan National leaders for guidance and consent.

When he was ready and rearing to go, some of these people had second thought about the timing of the action, including the Ramadhan fasting and the Hari Raya Aidifitri that followed.

Now Abdul Gani is gone and his lips are “sealed” for reasons that only he knows, the SRC International’s legal case is unlikely to see daylight anytime soon.

Abdul Gani's successor, (Tan Sri) Mohamed Apandi Ali, is unlikely to reopen the case. He has given us the preview of what is to come when he shot down Bank Negara’s recommendation to charge 1MDB for forex offences.

His stand and stance should not surprise us if we take into account his past involvement in politics and the circumstances in which he was appointment AG.

In the meantime, confidence in the government and thus in the economy continues to decline. The stock market – the indicator of investors’ confidence – tumbled after Mohd Najib presented his 2016 Budget on Oct. 23.

Even the mighty EPF is cautious. It is unsure about meeting its annual dividend target of inflation plus two per cent “due to volatile market movements since the middle of this year”, according to its CEO, (Datuk) Shahril Ridza Ridzuan.

Felda Global Ventures Berhad – Mohd Najib’s post- 2013 General Election corporate coup – is as good as a junk stock. In the last one year, its share price had fallen by almost 52 percent. It is now trading below RM1.80. Its 2012 IPO price was RM4.55 and it opened trading at RM5.39. FGV is the lifeblood of Felda settlers and Mohd Najib is their mentor.

EPILOGUE: – Prime Minister has filed a defamation lawsuit against former MCA president Tun Dr Ling Liong Sik. On October 5, Najib demanded that Dr Ling apologise and retract remarks reported in the press that claimed the prime minister “has taken people’s money and put it in his own personal accounts.” – The Malay Mail Online.