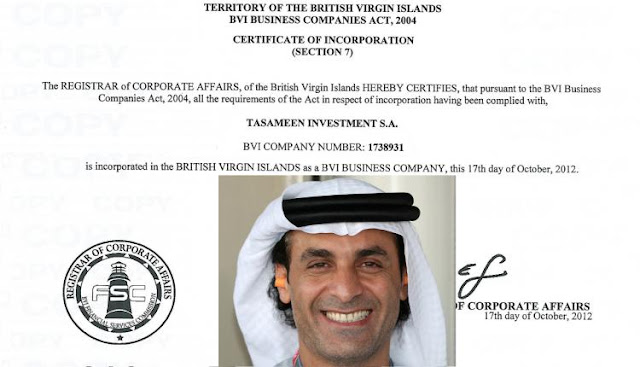 Al Qubaisi is now at the centre of the scandal over the billions stolen from 1MDB.

There are also on-going probes in the United Kingdom into a £110 million “commission” paid by Barclays Bank in return for a bail-out by Khadem’s boss Sheikh Mansour in 2008. That money also went to companies controlled by Al Qubaisi.

Meanwhile, Sarawak Report has also revealed that the Aabar fund itself, which lost a reported $50 billion under the management of Al Qubaisi, invested in several enterprises where Qubaisi himself held a private interest, in some cases through Tasameem.

These investments have included New York’s tallest residential property development 157 West 57th Street (now struggling to keep up profits) and a bid for Europe’s most expensive building, the Santander complex in Madrid.

Tasameem also holds substantial shares in a number of banks and development projects in the Middle East, including the luxury Zaya Nurai Island resort.

Earlier enquiries by Sarawak Report have established that a Florida Court case in 2010 confirmed that the owner of Tasameem Real Estate Investment Company LLC was indeed Khadem Al Qubaisi along with his brother, although attempts have been made to deny that this remains the case.

We have now acquired incorporation and share documents from the British Virgin Islands which show that as late as 2013 another off-shore arm of the company named Tasameem Investment S.A. was also 100% owned by Al Qubaisi.  Insiders have confirmed there was no change of ownership prior to 2016.

All 1,000 shares in the BVI arm of Tasameem were signed over to Khadem Al Qubaisi

The confirmation of Al Qubaisi’s proprietorial interest in Tasameem raises further questions over the status of America’s largest nightclub and entertainment empire Hakkasan, which has opened numerous outlets in Las Vegas and beyond and has also started massive investment projects as far away as in Mexico and Indonesia.

Promotion of Hakkasan in Vegas
Hakkasan is registered in the United Kingdom, having originally grown from a single popular Chinese Restaurant frequented by Al Qubaisi and bought out by Tasameem in 2009.
Its registered accounts show that since it began its rapid expansion in 2012, including the acquisition of a string of Vegas nightclubs, hundreds of millions of dollars in investments have been made.

Sequestered – SR identified this massive Beverley Hills mansion as a KAQ acquisition last year. The DOJ has now sequestered it.

These same accounts (the last being filed as late as May 2016) confirm that Tasameem Real Estate Investments LLC is the shareholder and that the investments have been funded by shareholder loans.

The explosion of Al Qubaisi’s own personal wealth is plainly dated back to an injection into the fund manager’s Edmond de Rothschild Luxembourg bank account in 2012 of half a billion dollars.  That money has now been confirmed by the United States Department of Justice’s recent indictment, which confirms Sarawak Report’s earlier reports that those payments came from the company Blackstone Asia Real Estate Partners, which is controlled by Jho Low.

The money, says the DOJ, can indeed be traced back to money stolen from 1MDB’s power purchase loans, originally raised by Goldman Sachs in 2012 and then sent to the bogus BVI subsidiary of Aaber, of which Al Qubaisi was a Director.

Khadem Al Qubaisi has been named as one of the targets of the DOJ asset swoop and has been charged with fraud, theft and money laundering in the US and Switerland. His Beverley Hills mansion and Walker Tower New York flat have been listed in the indictment.

So, is the entire Hakkasan nightclub empire, which is managed by the UK national Neil Moffitt, also vulnerable to becoming part of the next stage of this kleptocracy investigation? So far, the US has only impounded a billion dollars worth of assets, although the DOJ says it has identified at least $3.5 billion went missing.

A major management change over took place at Hakkasan in May, which saw the stepping down of Al Qubaisi as the Chairman of the company and the removal of his close associate Chad Tappendorf as well.

US Senator Norm Coleman replaced them on the Board, alongside another new face from Abu Dhabi, Khaleefa Butti Omeir Yousif al Muhair, who happens to have several business associations with Al Qubaisi and sits on the same residents’ association in Dorset Mews London, where the two men have properties.

Change overs of officers in May, but what about ownership and money laundering issues?
He appears therefore to be a relative or extremely close.

Khadem Al Qubaisi’s replacement on the Board is a fellow shareholder of his London residential mews, along with KAQ’s brother Saeed, who is registered as the other shareholder of Tasameem Real Estate Investments LLC
So, if Al Qubaisi has stepped off the board, has he also shifted the ownership of Tasameem and if so is it a genuine purchase which has taken place or has it just all been placed into the custody of a clos.