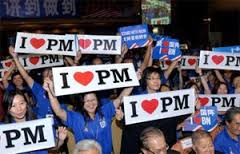 A very incisive piece on Malaysia - our State of the Nation
By: John R Malloy,
Former US Ambassador to Malaysia.

How ironic it is that many Malaysians are now being threatened for taking actions that are "detrimental to parliamentary democracy." Actually, they are the very people who are struggling for democracy and political freedom.

As someone who follows developments in Malaysia closely, I believe that the greatest threat to parliamentary democracy in Malaysia today is Prime Minister Najib Razak, and the head of the national police force that he controls, Khalid Abu Bakar.

It is Najib and Khalid who actually should be investigated for violating Section 124B of the Penal Code.

Najib wants to stay in power, no matter what. For any politician, that is understandable.

For whatever reason, Khalid has chosen to be Najib's lackey. He is ready to do Najib's bidding and deploy his police force in wilful violation of the law and the fundamental guarantees of Malaysia's constitution.

Macbeth, pushed by his evil wife's ambition, would stop at nothing - even murder - to gain power. And to accomplish his ends, Macbeth would depict evil as good, and good as evil.

So it is in Malaysia today. Those who seek democracy are called the enemies of democracy.

Meanwhile, those who really are the enemies of democracy - the people who close newspapers, charge opposition politicians with sedition, round up the leaders of peaceful protests, and arrest government officials who are investigating corruption at the highest levels - call themselves the "patriots" of the nation and the defenders of parliamentary democracy.

How perverse it all has become under Najib.

Reluctantly, I have come to the conclusion that Malaysia has now become a police state.

One should not use words like "police state" carelessly. So I consulted the definitions that political scientists and academics use.

That sounds like Malaysia today. Najib is turning Malaysia into an authoritarian government and a police state. And Khalid is his willing accomplice, a law unto himself, a man who renders justice through Twitter.

Who will save Malaysia?

Because of Najib's actions, Malaysia can no longer claim to be a democracy.

Democracy means freedom of speech, freedom of press, and freedom of assembly. It means that there are checks and balances - that the judiciary, the press, the parliament, and so on, can comment and criticise what the government is doing.

But today in Malaysia, none of that exists. There is no check on Najib's power. There is no institution that can balance his power, especially when the police are so ready to arrest anyone who dares to criticise Najib, including government officials who are investigating the many allegations of corruption against him and his wife.

Dr Mahathir Mohamad already destroyed most of Malaysia's checks and balances against the abuse of power, and Najib has now finished it off for good.

Will Najib get away with this? It seems that no one stands in Najib's way.

Malaysia's elder statesmen - Abdullah Ahmad Badawi, Tengku Razaleigh Hamzah, Musa Hitam, and so on are curiously silent. They claim that they care about Malaysia and its people, yet they do nothing about Najib's abuses.
Only Mahathir has spoken out. But Mahathir is the man who corrupted the entire system that Najib has used to his advantage.

And now even Mahathir has become silent.

Where are the sultans? They also are supposed to be the defenders of the nation. Yet we only know, indirectly, the views of the Sultan of Johor and his son. The others are silent as Najib destroys Malaysia's future, the great country that the Sultans have pledged to defend.

We know what Najib wants

Najib has decided that his personal survival is more important than the fate of his country. He and his wife care only about themselves, not Malaysia.

So the stock market tumbles, and the ringgit falls to its lowest point in almost 20 years. Malaysia's bank reserves have dropped by over US$40 billion in just one year. Foreign investors are shunning Malaysia, and Malaysians themselves are sending their money overseas. It is the worst situation for Malaysia's economy in 20 years.

But Najib doesn't care. His personal survival is more important than his country's economic fate.

Najib is now a desperate man. He will continue his relentless quest to stay in power, utilising every means possible, both within and outside his party.

The leaders of Bersih 5.0 and others who think that street demonstrations will force him to resign are naive. He already has shown that he has no hesitation to turn tear gas and billy clubs on his own people.

As things now stand, I cannot think of a good outcome. It is only going to get worse.

Cry, the beloved country. I can only weep when I think of Malaysia's future, when one man is able to subvert the institutions of government and thwart the will of the people. And when the great majority of the Malaysian people, from former leaders to the man in the street, stand by silently, and let him do it. 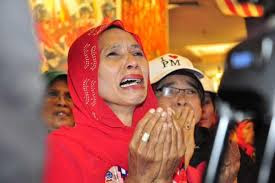